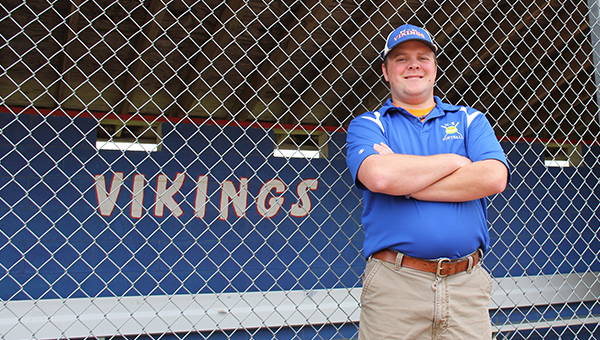 Northwood-Kensett head coach Ethan Weiss took over a program that was 1-26 two years ago. This year, the Vikings won their first five games of the season and are tied with Central Springs for first place in the Corn Bowl Conference standings at 8-2 overall. — Micah Bader/Albert Lea Tribune

Vikings find success with no seniors, 12 players on roster

NORTHWOOD — If the Northwood-Kensett softball team sold stock, shareholders would be doing backflips.

When Ethan Weiss took over the Northwood-Kensett softball program two years ago, the Vikings were 1-26. 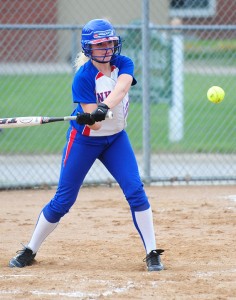 Hannah Hunchis swings at a pitch against Lake Mills. Hunchis is one of eight juniors who provide leadership for the Vikings. Hunchis has 11 hits through 10 games this season. — Micah Bader/Albert Lea Tribune

Northwood-Kensett improved to 9-16 last year. The Vikings won the tournament they hosted, and they strung together four consecutive victories.

This year, Northwood-Kensett already topped last year’s winning streak with five straight wins to start the season. The Vikings have earned a record of 8-2, and they’ve done it with no seniors and a roster of 12 players.

Junior pitcher Taryn Van Ryswyk has been filling the leadership role, and she is third in the Corn Bowl Conference with 24 strikeouts. Her earned run average of 5.21 so far this season is seventh in the conference.

“Taryn came in every week to work on her new pitches. She has a few more to add this year, which is great for our team,” Weiss said. “We’re always trying to add more. She’s gotten better with her control and confidence.”

Work in the offseason is critical, Weiss said.

In high school, Weiss played baseball at Glenville-Emmons, and he played first base at Waldorf College. He also has outfield experience. Weiss has been assisted in both of his seasons as head coach by Jayden Ott. Weiss said he’s impressed with Northwood-Kensett first baseman Samantha Butler on defense and at the plate.

“Sammie has been a key factor for us at first base filling in for a senior who graduated,” he said. “She’s been really clutch. Five out of her eight hits have been doubles with runners on base, so she has a lot of RBIs.”

Butler is second on the team with 12 RBIs. Freshman Shelby Low leads the team and the conference with 22 RBIs along with a .516 batting average.

Low’s numbers rank among the best in Class 1A. She is tied with six other sluggers for the second-most home runs in 1A with three, and she is tied for sixth 1A with her RBI total.

“We have seven juniors, two sophomores and three freshman,” Weiss said. “Hopefully, the practice they get this year will help carry over to the next season, and we can get a few more girls to come out.”

The Vikings withstood a rally by West Fork Monday to win 7-5.

Northwood-Kensett headed into the fifth inning with a four-run lead, but by the top of the sixth, the game was tied.

However, the Vikings prevailed with two runs in the sixth.

Northwood-Kensett plays next at Newman Catholic Wednesday at 7:30 p.m.