A club with camaraderie

The Bayside Ski Team in Albert Lea uses a trailer to store and transport its equipment to the show site at Edgewater Bay. –Brandi Hagen/Albert Lea Tribune

Kristin and Ike Dulas joke that their marriage was meant to be from the first time they met all because of a T-shirt.

Ike was wearing a T-shirt with the word “Nautique,” a boat brand, written on it.

“He joked that if he ever met a girl who knew what that was, that it was meant to be,” Kristin said. “I saw his T-shirt and I gave him a hard time. I teased him that the boat Mastercraft was better than Nautique, and so right from the get-go we knew about waterski boats.”

As their relationship grew and the couple married, they started looking for a hobby to do together. With waterskiing as a hobby in both of their families, the couple took a suggestion from Matt Levorson to join the Bayside Ski Team in Albert Lea.

“I had always heard there was a club in Albert Lea, but I had never gone to a show,” said Ike, a native of Wells.

The couple attended the spring meeting in 2006 and have been on the team ever since.

Kristin and Ike Dulas have been on the Bayside Ski team in Albert Lea for eight years. They joined the team as a hobby they could do together.

“Right away we were kind of hooked,” Kristin said. “We went to that and started practicing with the team in June.”

The experience Kristin and Ike had from skiing with their families and friends was helpful in their new adventure, but it wasn’t the same as show ski experience.

They said it took about a full year before they felt comfortable with it because there were so many new things to learn.

“You could learn forever,” Ike said. “We could still be learning more, but we’ve kind of found what we’re comfortable with.”

On the team Ike skis barefoot, strap doubles, trios, conventional doubles, trios, performs jumps and participates in the acting part of the show, too. Kristin skis in trios, swivel, pyramids and ballet.

“With the number of members we have we pretty much all do everything,” Ike said.

Kristin said one of the most memorable acts she and Ike have been able to do together in the show is a barefoot pyramid. A barefoot pyramid is set up with two men barefoot skiing and a woman climbs on top of their shoulders.

“It’s the most nerve-wracking one because you’re going so fast and if you do fall you hit the water hard. Falling at 10 miles an hour is different than falling at 40 miles per hour,” Kristin said. “We still like to hang our hats on that one like, ‘Oh we did that!’”

And while they have done some routines together, it isn’t common for the husband and wife to ski together in the show.

“You would think as a spectator that’s weird, but it’s not,” Kristin said. “As a skier, you’re thrown with all different skiers. Just because you’re married doesn’t mean you’ll ski together.”

Besides the routines on the water, Ike and Kristin have played other roles on the team, too.

Ike is the treasurer of the team, and Kristin previously had been in that role. Kristin also was a show director in the 2011 and 2012 seasons.

“We feel like we owe more than just showing up,” Ike said. “We don’t do well just putting the work on someone else.”

The Bayside Ski Team has about 60 pairs of skis for their members to use.

The couple feels like they are part of a like-minded group that has a lot of heart, which makes it worth all of the work.

Ages of club members range from as young as 4 to members in their mid-50s. Not all the skiers have skiing experience prior to joining. Ike said the club teaches its members to ski, and even its more experienced skiers learn from each other.

The club has all the necessary equipment so members don’t have to buy their own, something Ike thinks is a great feature of the Bayside Ski Team.

The other thing the couple enjoys about the club is it that it has a lot of families — both parents and children — skiing together. 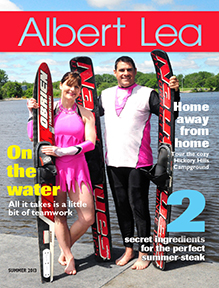 “It’s a great family sport where the parents can be involved at the same level that the kids can,” Kristin said.

They hope that someday their infant daughter, Juliana, will enjoy watersports, too, but for now, they look forward to their nights with the ski club as their night out as husband and wife.

“That’s our time,” Kristin said. “It’s husband and wife time, and we need to keep that in the forefront.”

Kristin and Ike thought about leaving the club after Juliana was born because of the time commitment, but they enjoy the people and the adrenaline rush of skiing and performing too much.

Interesting facts about the club

• The club’s costumes are either bought from other ski teams or, most often, are homemade by ski club members throughout the off-season. Jane Edwards, Deanne Zogg and Mary Jo Vanderploeg make sure the team has costumes that fit the theme of their show.

• The club makes its own ropes. The club orders a variety of spools totaling about 5,000 feet of colored rope, and Mike Johnson makes them into a useable product.

• There are about five different ways the club raises money to keep its show on the water. Its biggest fundraiser is installing and removing docks and lifts every year. The club members volunteer in their spare time to make the fundraiser a success. The club also raises money by passing a hat around at its weekly shows, having a snack shack, charging a membership fee and hosting tournaments.

About this year’s show

Among the show’s acts are barefoot skiing, jumps, wakeboarding and pyramids. The first show of the season is at 7 p.m. June 20. The pre-show begins at 6:30 p.m. The show continues every Thursday night until Labor Day at Edgewater Bay. In addition, there will be shows at 2 p.m. on July 4 and Labor Day.

The public is welcome to attend practices on Tuesdays and Wednesdays.

This year’s team has around 25 skiers.

The club is always looking for new members, and no prior skiing knowledge or ability is required.

Last year the Bayside Skiers hosted the Midwest Regional Water Ski Tournament. This year, they will travel to a tournament in Waterloo, Iowa, on July 27 and 28.

The shows are free to attend.