A family on the diamond 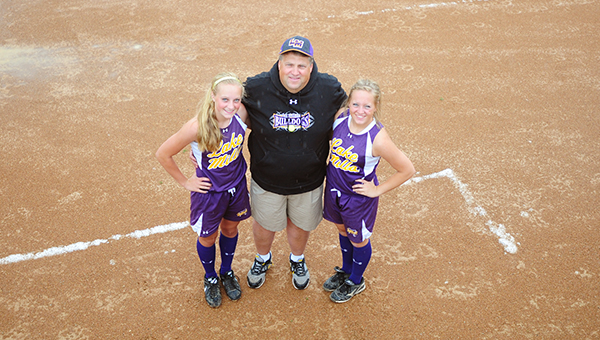 Softball and baseball rule the summer for the Orban family

LAKE MILLS — In the Orban household, softball is a family sport.

Rick Orban began his first season as head coach of the Lake Mills softball team this year, and his daughters Sarah and Emily have been leading the Bulldogs from the field.

Rick said he tries not to over-think going from dad-mode to coach-mode when he’s on the diamond.

“I try to treat every girl like they’re my own daughter,” he said. “That’s part of the reason why I took the job, it’s because I care about this bunch of girls.”

Rick took over a team that went 24-9 last season behind senior pitcher Josie Brackey. The Bulldogs made significant improvement from 2011 when they were 18-15.

Early this season, Lake Mills appointed a teacher with no previous softball coaching experience to coach the team. But later, Rick was hired, he said.

“I figured that rather than have someone who didn’t want to be here, I’d be here,” he said. “So, I took the job.”

Emily, a freshman, took over for Brackey as the Bulldogs’ ace pitcher. She has done so with a 9-4 record and a 3.22 earned-run average, which is the third-best in the North Iowa Conference.

Emily said she knows her dad has high expectations for her, and she likes the challenge.

“When I get into a tough situation, I always think of her, and how what she would do,” Emily said.

On the other side of the ball, Sarah, a junior, and the oldest of the Orban kids, has been hitting the cover off the ball.

Along with a batting average of .324, Sarah leads the team with 25 runs scored, 23 hits and seven stolen bases. Her run total is second in the conference.

Rick’s coaching style is different than the girls’ were accustomed to last season, Sarah said. But, the team is adjusting.

“Everyone is more relaxed this year than we were last year,” she said. “I think it’s helped us out a lot.”

The Orbans are from Glenville, and they are two of 83 kids who open enroll at Lake Mills. Rick’s wife, Mary, is a Bulldog alumnus.

Rick and Mary also have a 12-year-old boy, Nate, who plays baseball.

“He plays for the town team and the a town traveling team,” Rick said. “We’re either gone to a softball or baseball tournament pretty much all spring and summer.”

This season, the Lake Mills softball team is 10-9 and tied with Osage for fourth place in the conference. Newman Catholic leads the conference with a record of 15-7.

The Bulldogs are second in the conference in runs scored (109) and extra base hits (27 doubles and five triples).

“I’ve been pleasantly surprised with our offensive output,” Rick said. “We’ve only had one game where we’ve been shut out, and we’re averaging about 10 runs per ballgame, which is awesome.”

In their most recent game, the Bulldogs took down Forest City 4-3. After trailing the entire contest, Lake Mills rallied with three runs in the seventh inning. Ema Andersen led the charge with a two-run shot.

Next, the Bulldogs host Newman Catholic at 7:30 p.m. tonight.

“They’re a good bunch of girls, and they’ve got a lot of potential, “ Rick said.