A good time to be a kid 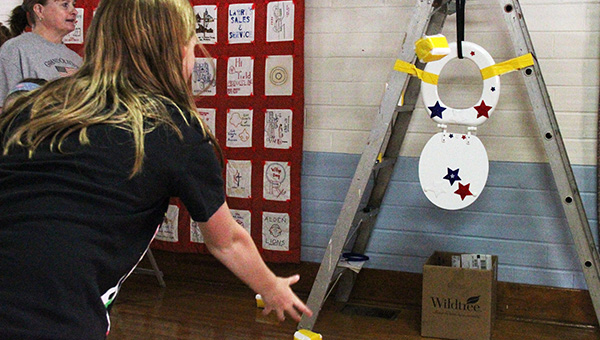 Autumn Soost successfully tosses a roll of toilet paper through a toilet seat hung upside down from a ladder Friday at Alden City Hall at the kids carnival during Morin Lake Days. — Tim Engstrom/Albert Lea Tribune

ALDEN — The children of this western Freeborn County community for the second year in a row enjoyed a kids carnival instead of a kiddie parade as part of Morin Lake Days. 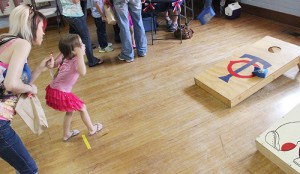 Tiana Gonzales, 5, reacts to her toss of a beanbag Friday evening during the kids carnival at Morin Lake Days in Alden. — Tim Engstrom/Albert Lea Tribune

On Friday, the carnival was moved inside Alden City Hall because of cloudy skies and a forecast of rain.

The Alden American Legion Auxiliary holds the event “because it is Morin Lake Days and we’re just doing something for the kids,” said President Mary Stoneback. 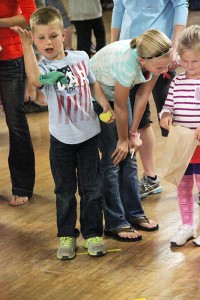 The Legion Auxiliary for years ran the kiddie parade but switched to a carnival in 2012. Treasurer Candy Sorensen said it was because it became harder each year to match with Morin Lake Days themes and because many kids already were in the main parade.

The carnival takes more work than a parade. It features games of skill, such as a beanbag toss, a floating duck draw and even a toilet paper toss. The carnival was outside last year, and about 80 children came.

“The kids really came out to it,” Sorensen said.

Attendance was looking decent Friday, she said, though not likely as high as last year. That was likely because being outside provides greater exposure. 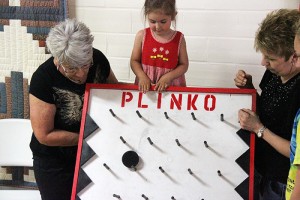 Brooke Soost, 8, went last year, too, and said she prefers the indoors version of the kids carnival better than the outdoors one. Her favorite game was the duck draw out of a fish bowl.

Alexa Newman, 12, said her favorite was the toilet paper toss. Participants had to stand behind a line and toss toilet paper through a vertical toilet seat. Her prize for making it through successfully was a bracelet with a U.S. flag on it. She liked the outdoors carnival better. 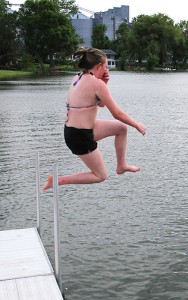 The idea for the game with bathroom humor was borrowed from the Albert Lea Parks and Recreation Department, said Janice Bolinger. Her daughter, Jesse, worked a summer job with the department and had assisted with kids carnivals.

One game on Friday in Alden required kids to stand behind a line and toss golf balls into a firefighter’s boot. On display behind the boot was a firefighter uniform.

Janice Bolinger said Morin Lake Days this year is honoring first responders, and it was a way of incorporating the theme into the games.

And, of course, during Morin Lake Days, it isn’t difficult to find kids swimming in Morin Lake. A half dozen were swimming Friday despite the cloudy weather. They said the water was warm. Allie Lammey, 7, said she likes to swim every day.

Autumn Anderson, 13, said Morin Lake Days are a great time to be a kid in Alden.

See more photos in the print edition of the Sunday Tribune.