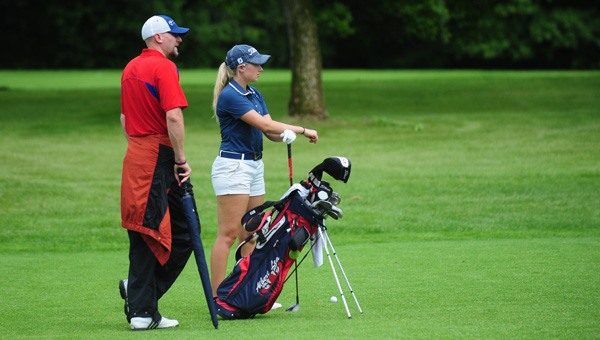 Pulley took 19th place with a score of 164 to surpass her goal of finishing in the top 20.

“The experience was great, and the tournament was a lot of fun,” Pulley said. “It was everything that I’ve always wanted.” 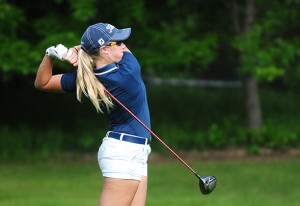 Albert Lea senior Megan Pulley hit her target of finishing in the top 20 Wednesday at the girls’ Class AAA state golf tournament. Pulley earned 19th place in a five-way tie with a score of 164. Pulley also earned the best finish of any girls’ golfer in the Big Nine Conference at the state tournament. — Micah Bader/Albert Lea Tribune

Pulley has been a serious golfer since she was in elementary school, Albert Lea head coach Shawn Riebe said.

“Ever since I met her in fifth grade, golf was her sport, and she truly wanted to get to get to this level,” he said. “She’s worked hard for it.”

The tournament consisted of two days with a round of 18 holes each day. On Day 2, players waited out a rain delay in addition to adjusting to the extra time the state tournament takes, compared to a regular-season tournament.

“It’s a really a grueling tournament,” Riebe said. “During the season, it’s typical for Megan to play three and a half hours. It changes the dynamic of the game.

“She really hung in there and ground it out well.”

Two other girls’ golfers represented the Big Nine Conference at state: Katrina Reudinger of Rochester Mayo and Abbe Partington of Winona. Reudinger trailed Pulley by two strokes to take 24th place, and Partington finished with a score of 169 to earn a two-way tie for 38th place.

Pulley began the second round with a chip-in for a birdie on the fourth hole of the front nine to give her an early score of negative two. She finished the front nine with her second best score of the tournament, 39, and she shot a 46 on the back nine.

“It was a great way to end a fantastic career,” Riebe said. “I think she is ready to play at the Division I level, and she will be missed by Albert Lea girls’ golf.”

Riebe also noted that he is looking for the rest of the team to work hard this summer to be competitive in the section tournament.