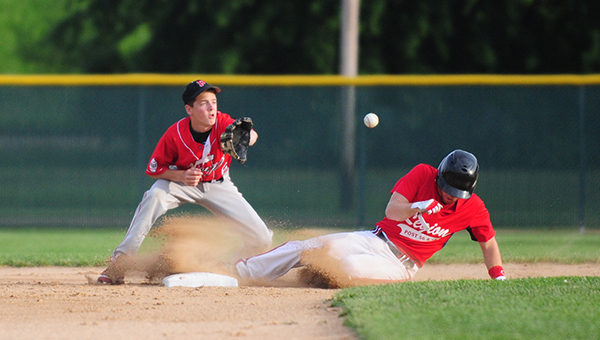 Tommy Olmstead of Albert Lea/Austin steals second base Wednesday against New Richland. Olmstead was 2-for-3 at the plate. He scored two runs, knocked in two runs and had two stolen bases. — Micah Bader/Albert Lea Tribune

Tyler Pirsig led Albert Lea/Austin to victory by pitching the first four innings and only allowing one hit. 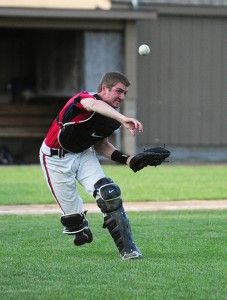 “You can definitely throw strikes when you’ve got our defense backing you up,” Pirsig said. “Just put it over the plate, and they can hit it to anybody on the field and it is almost an

Alec Pepper pitched the final three innings in relief. He allowed two hits and one walk.

“Both of them have never pitched over the JV level,” he said. “We just thought it was a good chance for them to play.”

New Richland’s coach did not attend the game, so players took the first- and third-base coach positions.

New Richland held its first and only lead of the game in the top of the first inning. Albert Lea/Austin fought back with three runs in the bottom of the first. Tommy Olmstead hit a lead-off single, stole second and moved to third on a single by Johnathan Fleek. Dylan See-Rockers drove in Olmstead and Fleek with a base hit. See-Rockers later scored on a single by Chris Enderson with an error to give Albert Lea/Austin a 3-1 lead. 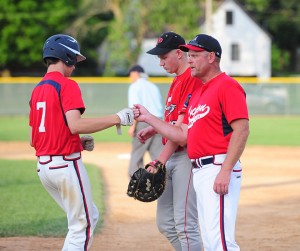 New Richland managed to score two runs in the fourth inning, but Albert Lea/Austin took the momentum back with an in-the-park home run by Kasak.

“The defense is getting more solid each night,” Enderson said. “We had a couple glitches here and there, but it’s with kids playing where they don’t play or haven’t played much.

“The biggest thing is we’re staring to know our players now.”

“Our team has a lot of good hitters,” See-Rockers said. “Everyone is doing their jobs, and we’re getting big hits, too. That always helps.”

Johnathan Fleek was hit by a pitch three times. He scored two runs.