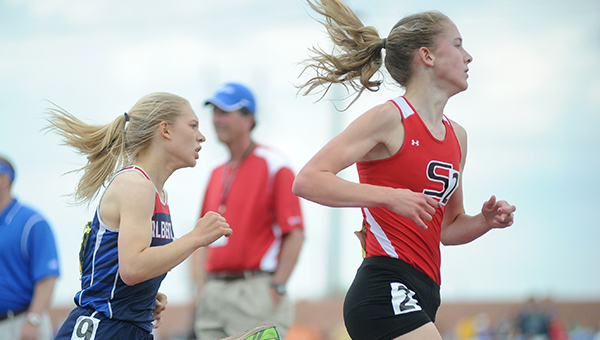 By Micah Bader
and Rocky Hulne
tribsports@albertleatribune.com
ST. PAUL — Albert Lea senior distance runner Chrissy Monson medaled with a ninth-place finish in the Class A 1,600-meter run Saturday during her second and final event at the state track meet. 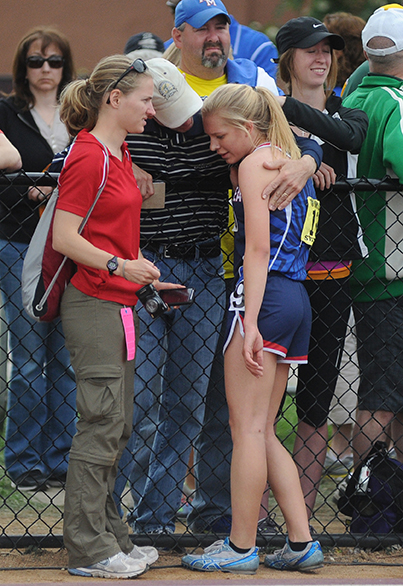 Albert Lea’s Crissy Monson has a moment with her parents after taking ninth in the 1,600-meter run in the Class AA state track and field meet in St. Paul Saturday. — Rocky Hulne/Austin Daily Herald

“I wanted to go out with no regrets,” Monson said. “I believe that I did that.”
The field was competitive: The top 10 runners finished within 10 seconds of each other. Monson held first place for the first three laps.
“It was my last race, and I wanted to see how much I had,” she said. “I couldn’t keep it up on that last lap, and it really got me. But I’m not going to hang my head about it, because I’ve done a lot of work to get here.”
“She ran her heart out,” Albert Lea distance coach Lon Nelson said. “She knew it was her last prep race and wanted to PR (set a new personal record time), which she did. We will miss her.”
Monson’s official time was 5:07.36. Her seed time was 5:09.05.
Jenna Truedson of Bemidji broke five minutes by less than a second to win the race.
“I know she (Truedson) can’t be running those times without putting in a lot of time, and she deserves it,” Monson said. “I just want everyone to do their best.”
Monson also competed Friday in the 3,200-meter run where she took 15th place with a time of 11:10.73.
Monson was the 1,600-meter state champ as a sophomore. Next year, she will continue running distance as part of the Northern Illinois University track and field team.