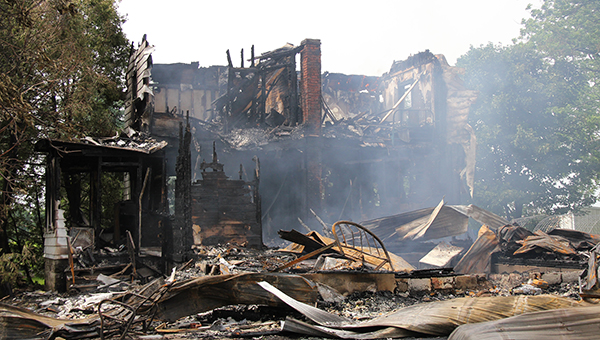 NORTHWOOD — An Amish farm home looks to be a total loss after a fire Thursday night.

The home, at 5052 Nuthatch Ave. north of Northwood, is owned by Menno Borntreger. He and six other people occupied the home, though no one was in the home at the time of the fire. No people or animals were injured. 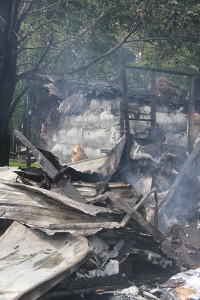 Borntreger said he thought the fire started around 8:30 p.m. Thursday. And the likely culprit could be a wood-fired water heater, Borntreger guessed.

“I was up the road,” Borntreger said.

He could see the fire from where he was standing at his son’s home. He and others went into the burning structure and saved some important paperwork and clothes.

Borntreger said he was thankful no one was hurt in the fire. Everyone was outside or in the barn doing chores and milking goats when the fire started.

“It went so fast,” Borntreger said. “It was full of smoke right away.”

Heavy rains did help slow the fire. It was still smoldering in some areas midday Friday. Borntreger said he was grateful to both the Northwood and Kensett fire departments for helping to save other structures on the land, which include a few sheds and a large barn that housed horses and goats. 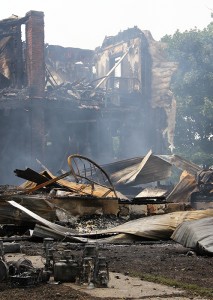 The home had eight bedrooms and was connected to other structures, some of them added just a year ago. A large laundry room was adjacent to the home, as well as a general store of sorts where Borntreger said he sold bulk foods, hardware and dried goods. Also nearby was an ice house with large blocks of ice. Though part of the structure had burned, there was still ice slowly melting on Friday.

Borntreger said they plan to stay with a neighbor for a few days. He did not have insurance on the home, but he does plan to rebuild with help from family and friends.

“We try and help each other,” Borntreger said.