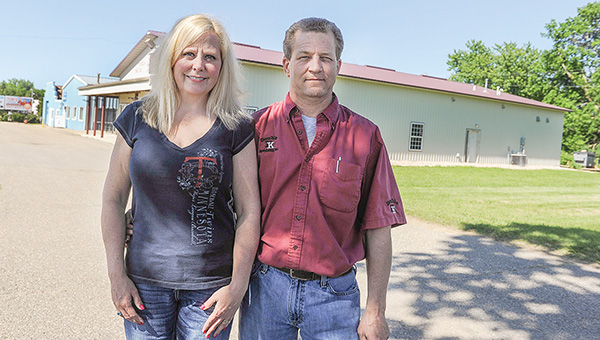 AUSTIN — Several businesses in Austin and Mapleview will soon be playing musical chairs.

Double K Specialty Inc. owner Kyle Klaehn told the Herald Thursday he bought and is moving next month to the former home of Midnight Sun Spa in Mapleview, which will close.

Owner Dan Schreiber said Midnight Sun Spas could leave Austin and possibly move to a new town. Schreiber, who owns other Midnight Sun Spas locations, said he wished people in the community would have supported the business in Austin.

“If you don’t support your local companies, they ain’t going to stay. … I just wish things would have worked out down there,” he said.

Double K’s move, from 803 18th Ave. NW in Austin to 2206 and 2208 Fourth St. NW in Mapleview, will also affect the Mapleview Barbershop, but the business will stay in the same place.

Kyle and his wife, Kerri Klaehn, purchased the property from Dolan’s owners Brian and Kathy Dolan. The couples are longtime friends and neighbors.

“We’re very excited. Our staff is excited,” Kyle said of the new location. “We’re anxious to get situated.”

Meanwhile, the move won’t affect sandwich chain Jimmy John’s or the Sassy Strawberry frozen yogurt shop, set to move into Double K’s current location in the coming months. There’s room for another business there, too, and the Veterinary Medical Hospital will stay in the building, but move to the back of the facility to what used to be Double K’s warehouse.

Work on the vet’s new home is underway, and a complete overhaul of the north side with Jimmy John’s and the Sassy Strawberry is scheduled to start Monday, according to property owner Wayne Fett.

Fett was in talks to bring a third new business to the property, but he said it did not work out.

A move for the future

July 27 will be the last business day at 18th Avenue for Double K. The business will be closed on July 28 and 29 for the move before opening July 30 at the new site.

The move will split Double K into two locations. The 2206 property — currently the home of Midnight Sun Spas — will house mostly pet products, including a larger pet grooming area, a new fish room and most of the products available today, with perhaps a few new items in the future. Double K will no longer carry clothing.

The footwear side of the business will expand and be located in the adjacent building, 2208, but both will still keep the same uniform name.

At 18th Avenue, Double K’s warehouse size was to be reduced by 90 percent, with Double K taking up 5,600-square feet of the 11,500-square foot building after the remodel.

Kyle previously said he was he pleased with new businesses coming because the two would help “jump-start needed change for Austin retail.” He said Thursday he was not moving because of Jimmy John’s and Sassy Strawberry.

Instead, Kyle described it as a business decision based on his and Kerri’s belief owning property was the best choice moving forward. He has rented the space on 18th Avenue since 2006.

“It makes business sense from several angles financially,” Kyle said, noting when he makes changes to the building, it will be an investment on property he owns.

Kyle said ownership will help the business remain competitive in the face of increasing costs, like taxes and the price of goods — costs Kyle doesn’t expect to decrease anytime soon.

“Making this transition or this move will better position us as owners of Double K to be in a better position to survive and be successful in light of the fact that we continue to watch anything and everything keep increasing in cost,” Kyle said, adding the move is a long-term commitment to the community.

Kyle admitted daily traffic numbers are considerably lower on Fourth Street compared to 18th Avenue, but said that may be a plus for some.

“There are consumers that prefer not to fight the traffic,” he said.

While there are positives and negatives to any move, Kyle said, he and Kerri are focusing on the positives.

“I do not look at this as a negative move from a location,” he said. “We look at it as a positive move.”

Kyle planned to discontinue drive-through service at 18th Avenue, but it will continue at the Fourth Street site. The drive-through will be located between the 2206 and 2208 buildings, where there is currently a fence.

“We can continue what we feel is one of our strongest services,” he said.

Kyle plans to cover the drive-through, but not in the immediate future.

He’ll also paint the 2208 building to match the appearance of 2206, along with some other modifications to the property.

Double K will have about 9,000-square feet on Fourth Street, which will be the fifth location of Double K during the Klaehns’ 22 years owning the business.

“We are so grateful and humbled by our following of our customer base wherever we have been,” Kyle said.