Blanche May (Monson) Nichols, 91, of Austin, formerly of Blooming Prairie, died at Oak Park Place Assisted Living in Albert Lea on Tuesday, June 25, 2013. She was born Oct. 27, 1921, to Thoris and Thelma (Smith) Monson at home in Gordonsville. She graduated from Onamia High School and went to work in the office at Josten’s in Owatonna. She married Byron Nichols in Iowa on June 15, 1940. They made their home in Blooming Prairie where they raised six daughters. Byron passed away on May 16, 1986. Blanche moved to Austin, where she lived at Burr Oak Apartments until moving to Oak Park Place Assisted Living in Albert Lea. While living in Austin, Blanche attended Grace Baptist Church and remained a member of First Baptist Church in Blooming Prairie. 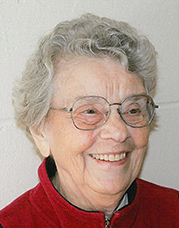 Funeral services were prearranged and will be at 10:30 a.m. Monday at First Baptist Church in Blooming Prairie with Dr. Bruce Love officiating. Visitation is from 2 to 5 p.m. Sunday at Worlein Funeral Home in Austin. Interment is at Greenwood Cemetery in Glenville. Condolences may be expressed to the family online at www.worlein.com.