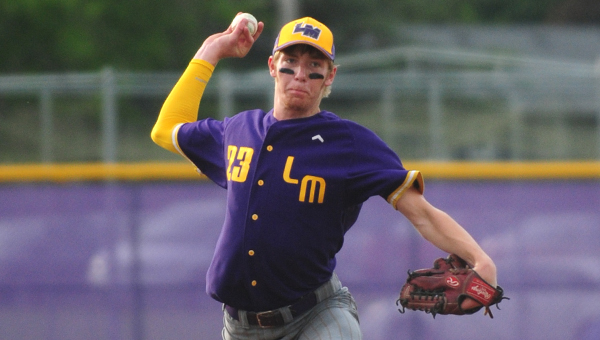 Lake Mills junior pitcher Taylor Throne winds up to throw a pitch Friday against Belmond-Klemme. Throne struck out six batters and walked one from the mound. He also hit a three-run shot in the bottom of the third inning. Lake Mills won 8-3. — Micah Bader/Albert Lea Tribune

Both teams scored a pair of runs in the fourth inning as Lake Mills took a 5-2 lead.

Belmond-Klemme cut its deficit to one run in the top of the fifth, but the Bulldogs pulled away in the bottom of the sixth with three more runs to take a five-run advantage and win 8-3.

Throne pitched the first 3 2/3 innings. He struck out six batters, walked one and allowed three hits and two earned runs.

Throne, Josh Peters and Lincoln Boehmer led the Bulldogs at the plate. Throne earned a team-high four RBIs, and in addition to his two-run home run, he hit a double. Throne leads the Bulldogs with 18 hits on the season. Peters was 2-4 with two runs scored and a pair of stolen bases. Boehmer was 1-2 with one run scored and two RBIs.

Lake Mills improved to 9-5 overall on the season. The Bulldogs have won three straight games. The other two games in the streak are a 1-0 win at Newman Catholic and an 11-4 victory at West Hancock.