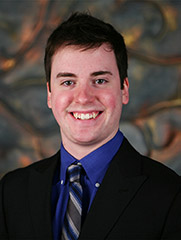 Studio One airs at 10:30 a.m. Wednesdays and Thursdays on Channel 6 in Minneapolis. It can be viewed by audiences in North Dakota, Minnesota, Colorado and Canada. It can also be viewed online at www.studio1.und.edu.

See-Rockers is a junior at UND and will graduate in May 2014 with a major in communication. Besides his internship, he is the president of Sigma Phi Epsilon, on the Judicial Board of Student Government, an Order of Omega member and participates in intramural hockey and broomball.