Memorial services for Charlotte L. Dagner, 97, of Albert Lea, will be at 2 p.m. Friday at Calvary Baptist Church. The Rev. Kent Otterman will officiate. Friends may greet the family one hour prior to the service. Interment was in Greenwood Cemetery, Glenville. Online condolences are welcome at www.bayviewfuneral.com. 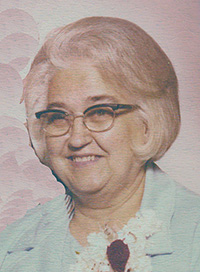 Charlotte died on Friday, Jan. 25, 2013, at the Good Samaritan Society of Albert Lea.

Charlotte Lavina Dagner was born on Oct. 17, 1915, in Freeborn County, the daughter of Hans W. and Amelia (Jensen) Christenson. At the age of 6, Charlotte moved with her family to their farm northwest of Clarks Grove where she grew up. She attended grade school at District 5, finishing the eighth grade in seven years. She was baptized and joined the First Baptist Church of Clarks Grove in her early teens. Charlotte was married to Herbert Steinke who was a casualty of World War II. Together they had a daughter, Joyce, who was born on Charlotte’s birthday, Oct. 17.

In 1949, Charlotte married John E. Dagner at the Little Brown Church in Nashua, Iowa. Together they lived at 908 Bridge Ave. in Albert Lea until building their own home at 2109 Bridge Avenue. When they moved to Albert Lea, Charlotte joined Calvary Baptist Church. She enjoyed reading and doing embroidery. Blessed be her memory.

Charlotte was preceded in death by her parents, her husbands Herbert and John, sisters Lucille and Ferne and brothers Leo and Roger, as well as her brother Leon in infancy.