Let’s talk about the newspaper industry. I have some numbers for you.

While it is true that advertising revenue is down among newspapers in general, those figures are weighed down heavily by the slow demise of large metro newspapers. Community newspapers have a different story to tell.

According to the Reynolds Journalism Institute’s survey of newspapers where circulation is 15,000 or less: 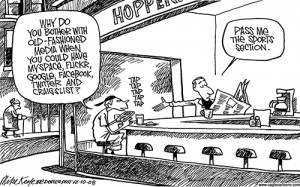 • 96 percent of readers pay for the newspaper

• 77.4 percent read the paper for local news and information.

• 46 percent use the newspaper for their political and voting decisions.

What do these numbers say to me? The Albert Lea Tribune and papers like it are strong. They mean that people in small and mid-size cities care about their communities more than people in big cities and their suburbs. In Albert Lea, you want to read about the kid down the street getting a scholarship. In Eden Prairie, you probably don’t even know the kid down the street. In Albert Lea, it’s not that hard to get a picture of the fish your kid caught into the newspaper. In Minneapolis, it’s highly unlikely. To walk in and talk to a newsroom staff member in Albert Lea isn’t that difficult. In any big city, you have to pass through security and you probably won’t get in without an appointment.

That close connection people in small and mid-size cities have to their newspapers has turned out to be their strongest value during these times of media diversification. In fact, when people ask me lately about the state of newspapers, I remind them that Kiester lost its school, then its convenience store, then its grocery store, but it still has a weekly newspaper. The mighty Courier-Sentinel keeps on coming out every Thursday.

The problem isn’t that people don’t want news. They just want it in different ways now.

That means the websites newspapers maintain are absolutely important. This and every newspaper are being read by more people than ever thanks to the global reach of the World Wide Web. These readers are the long-term future, and it is smart to build that audience. In fact, our audience on handheld devices such as smartphones and iPads is growing super fast. The website is a convenience for many reasons:

• We can post breaking news swiftly, getting it out to readers often faster than competitors in TV and radio. There is no waiting for press times and carriers.

• People from out of town who have interests in Albert Lea can stay in touch with the community.

• Readers of the print edition, if they no longer have a hard copy in their possession, can go back and find stories online. Who hasn’t read a story and then for an unexpected reason needed the information days later after the paper was tossed out?

• It is much easier for online readers to share stories with their friends. That said, I still get clippings now and then from grandparents of stories they think I should read. I do appreciate both modes of sharing.

• The web doesn’t run out of print space. No matter how many photos there are or how long a story is, there is room to print it.

But the major convenience of the print edition is this:

• You can read it cover to cover and know you haven’t missed anything. Websites work on a 24/7 basis, so things change and update and news comes in. Plus, websites require point-and-click navigation to all sections, whereas the print edition requires mere page turning. And print readers get puzzles, comics and advertising inserts. If you read the paper once a day, you pretty much have your thumb on the pulse of Albert Lea.

And even though there are fewer readers of printed newspapers in the United States of America, consider this: More Americans each day read a printed newspaper than watched the Super Bowl back in January.

People chitter-chatter now and then that the decline of Facebook is coming. Yeah, right.

Facebook is by far the dominant social networking website. Here are percentages for the time web surfers in the United States spend on social media, according to comScore Media Metrix, a highly reliable audience-measurement provider:

It is interesting to learn which web properties are the most valuable in terms of audience (for web geeks: the numbers below are unique visitors). Here are the top-10 leaders of the war for the Web, for here in the United States in March 2013: