Donation is a jewel 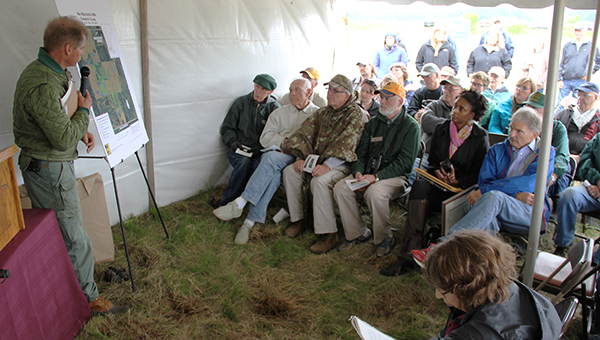 NEWRY — About 70 people gathered under or near a tent Thursday in northeast Freeborn County to dedicate Minnesota’s newest wildlife management area, one that offers prairie, oak savanna, wetlands and rolling topography.

The Wo Wacintanka State Wildlife Management Area “already is a jewel in the system,” said Ed Boggess, director of the Division of Fish and Wildlife.

“I tell you, we will take good care of it and make sure people are able to enjoy it for years to come,” he said.

The 550-acre land donation to the state came from Minneapolitan John C. Goetz of the Minneapolis injury law firm Schwebel, Goetz & Sieben. Valued at $664,000, the donation came in late 2012 and marks one of the largest individual donations the Minnesota Department of Natural Resources has received. The DNR will manage the property to conserve wildlife and habitat and to provide grounds for hunting, hiking and wildlife watching.

There are 1,440 wildlife management areas in Minnesota. This donation becomes the 11th in Freeborn County. 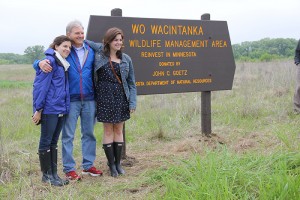 John Goetz stands with his two daughters beside the sign along Freeborn County Road 35 in Newry Township.

Rick Erpelding, assistant area wildlife manager out of the DNR’s New Ulm office, said restoration of a native prairie or savanna is never fully restored to what it was in the pioneer days. He said it takes time, patience and perseverance to restore more than 300 acres of cropland to native grasses. The work on it spanned from 1998 to 2012.

That determination is where the former farm got its name. Wo Wacintanka in Dakota means “to persist in spite of difficulties.”

Erpelding said the location is remote enough to be away from cities and their street lights.

He said the site will be a treat for wildlife enthusiasts. “I can guarantee this thing is full of wildlife,” Erpelding said. 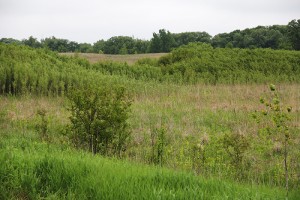 The Wo Wacintanka State Wildlife Area is a mix of prairie, oak savanna and wetlands in Newry Township in northeastern Freeborn County. –Tim Engstrom/Albert Lea Tribune

In 1995, Goetz bought 320 acres from the estate of Alvin Christensen, who was born on the farm, lived there all his life and died there. Goetz described him as “an old-fashioned land-steward farmer” who never bulldozed the oaks or drained the wetlands. Instead, he let cattle roam in those areas and plowed areas that made sense for crops.

Goetz bought it with an interest in saving Christensen’s savanna and prairie, then renting out the cropland.

Quoting Goetz, Ken Varland, the regional wildlife manager out of the New Ulm office, said the purchase was like buying land from one of Garrison Keiller’s Norwegian bachelor farmers, characters on Keillor’s variety show “A Prairie Home Companion” on public radio.

As time passed, Goetz learned more about preservation programs from the Minnesota Land Trust, the DNR and the U.S. Department of Agriculture. Eventually, he purchased 230 acres from three adjacent parcels. He came to know Erpelding through an interest in developing wildlife habitat on the site. 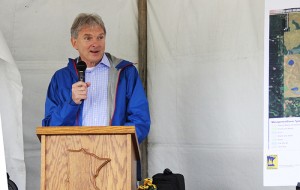 Donor John Goetz speaks to attendees of the dedication Thursday of the Wo Wacintanka State Wildlife Management Area. Wo Wacintanka is a Dakota term for “to persist in spite of difficulties.” Much of the property used to be farmland.

Before deciding to donate the land, Goetz spoke to naturalists Al Batt of Hartland and Larry Dolphin of Austin, who assured him that they would bring children to learn about nature at the property.

“They both said yes, then John said yes,” said Carrol Henderson, nongame supervisor for the DNR, describing how the deal went down. “This is a perfect area to bring children from this area to discover nature.”

Goetz praised wildlife managers and conservationists in Minnesota and said he was glad the land is in safe hands. Before donating, all but two acres already had been in a Reinvest in Minnesota conservation easement, where a local Soil and Water Conservation District implements restoration practices paid for by grants to the Minnesota Board of Water and Soil Resources.

“I didn’t want to be the only one to tromp around and enjoy this land,” he said.

There are no human-made trails, Erpelding said. There are some deer trails, which could be used as wind breaks during prescribed burns. Most people will have to walk through tall grass. There is no parking lot, which he said invites litter and other problems. The land is accessed, he said, by parking on the shoulder of gravel 305th Street on the south end or parking on the old farm entrance near the sign along Freeborn County Road 35 on the north end, which is where the Thursday dedication was held.

The address of the land is 87911 320th St., about three miles southwest of Blooming Prairie.

DNR Deputy Commissioner David Schad said Freeborn County and the prairies of southern Minnesota are special to DNR Commissioner Tom Landwehr, who could not attend because of a meeting with Gov. Mark Dayton. He passed on his thanks and said hunters will appreciate the land.

“A vision requires a visionary, and we have one in John Goetz,” Erpelding said.

Goetz, an avid skier, bicyclist and hiker, has made land donations before. He donated 45 acres to the Maiden Rock Bluff State Natural Area near Stockholm, Wis., and donated a 110-acre conservation easement in Sibley County in Minnesota. He is a former president of the West Wisconsin Land Trust and is on its board.