A memorial service will be at 11 a.m. Saturday at the Freeborn Congregational United Church of Christ Church. Visitation will be one hour prior to the service at the church. Bruss-Heitner Funeral Home is assisting the family with arrangements. 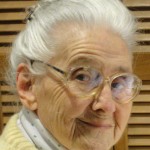 Her return to Jaffna placed her on board a Dutch ship entering Pearl Harbor on Dec. 7, 1941, from which she witnessed the attack on the United States naval fleet. She married Edwin John Grainger, in Bombay, India, in 1942 and resided later in Shanghai, China. In 1949 with her infant daughter in her arms she was evacuated by the United States Navy five days before Shanghai fell to the invading People’s Liberation Army.

She was preceded in death by her beloved husband, Edwin John Grainger; brothers, Charles and Ernest Peek; and sister, Stella Colberg.

She is survived by her daughter, Stephanie Kampas; son-in-law, Robert; grandsons, Brien and Christopher; and sisters, Helen Safford of Arizona and Edith Nelson of Minnesota.

Memorials may be made in her name to The Freeborn Congregational UCC Church or the Freeborn County Historical Mueseum in lieu of flowers.