Flash flood watch is in effect 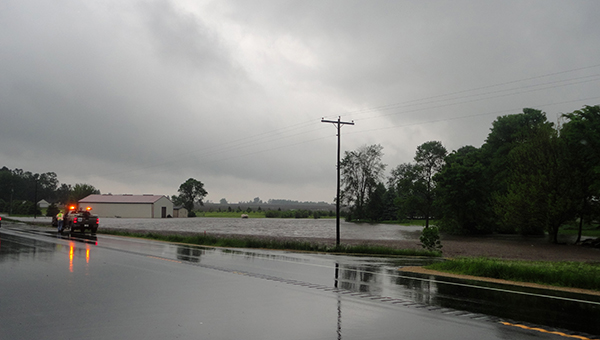 The National Weather Service has issued a flash flood watch for Albert Lea and its vicinity.

The watch is in effect for the Minnesota counties of Freeborn, Faribault, Mower and Fillmore and for several northern Iowa counties, including Worth and Winnebago.

The watch statement for Freeborn and Faribault counties said portions of these counties received 3 to 4 inches of rain Wednesday. The rain fell on ground already saturated from the wet spring. Because of moderate to heavy showers expected today and Saturday, there is a heightened potential for flash flooding, the weather service states.

“An additional 1 to 2 inches are possible,” the statement says. “Some of the rain could be very heavy at times.”

It says streams and rivers could rise quickly and flood roadways.

The flash flood watch is in effect through Saturday evening. 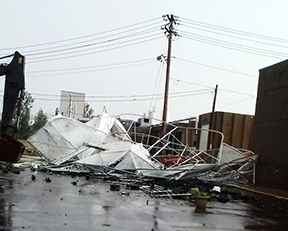 WASHINGTON (AP) — A massive storm system that started in the Upper Midwest brought soaking rains and heavy winds to the Mid-Atlantic Thursday, causing widespread power outages, flash flooding and extensive flight delays, but largely failing to live up to its fierce billing.

The severe weather was also blamed for two deaths.

The storm came and went in the Washington, D.C., area ahead of the evening rush hour, bringing winds and thunder that knocked trees onto houses, cut power to thousands of homes and traffic signals and led to the brief closure of a bridge that connects to the beaches on Maryland’s Eastern shore.

Three tornadoes were reported in Maryland, though there were no immediate reports that they caused significant damage.

“The wind was pretty bad. It was just a squall that came through really fast,” said Jim Estes, director of instruction at a golf driving range in Olney, a Washington suburb where one tornado was reported.

In Richmond, Va., a 4-year-old boy was fatally struck by a tree that toppled while he was visiting a park with his father. Capt. Emmett Williams of the Richmond police said the boy was crushed by an old yellow tulip poplar tree that became uprooted from rain-soaked grounds during heavy winds and rains. The father was taken to the hospital with non-life-threatening injuries. Maymont Park board member Mary Lynn Bayliss said workers with bullhorns were scrambling around the 100 acres of preserved woodlands and gardens to try to get people to safety. 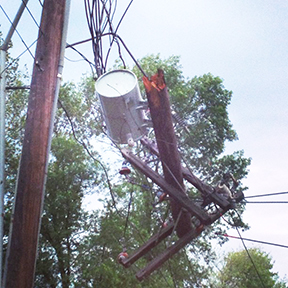 A power pole and its transformer dangle from their power lines on Sixth Avenue in Wells on Thursday morning, following an intensive thunderstorm Wednesday evening. –Lisa Foley/Albert Lea Tribune

Lightning from a fast-moving storm may have sparked a fire that killed a western Pennsylvania man early Thursday, the state fire marshal said.

And during an initial wave of morning storms, a 19-year-old woman who works as an intern at Plumpton Park Zoo in Rising Sun, Md., northeast of Baltimore, was struck by lightning while feeding the animals. She was being treated at a hospital after a co-worker performed CPR.

Dire predictions from forecasters, including warnings throughout the region of tornadoes and thunderstorms, led to precautions throughout several states.

Maryland transit officials briefly closed the Chesapeake Bay Bridge, a critical artery connecting the Baltimore-Washington area with Delaware and Maryland’s Eastern Shore. Customers and employees of Baltimore Washington International Thurgood Marshall Airport were directed at one point to seek shelter, in a bathroom or in the lowest level of the terminal, amid the threat of tornadoes.

Flightstats.com reported that hundreds of flights were canceled and thousands more were delayed at East Coast and Midwest airports on Thursday, with the New York-Washington corridor particularly affected.

As of Thursday night, there were about 30,000 outages in Maryland, the state emergency management agency said, and more than 300,000 in Virginia.

The Mid-Atlantic wasn’t the only region to get hit Thursday. Lightning lit up the sky over Atlanta Thursday evening, as a line of thunderstorms moved through north and central Georgia. Georgia Power reported that nearly 1000,000 customers had lost power as of 8:30 p.m.

In North Carolina, weather forecasters and utility companies reported downed trees and more than 157,000 customers without power, mostly in the Piedmont region.

Still, overall, the storms appear to have caused less wind damage than was feared through early Thursday, said Bill Bunting of the National Weather Service’s Storm Prediction Center in Norman, Okla. Whether they were as bad as anticipated, he said, “depends on where you live.”

He said thunderstorms took longer than expected to merge into a large line that could cause widespread damage. The merger also happened farther east than expected, which limited the potential for widespread damage in Illinois and Indiana, though those states still had pockets of severe weather.

Even before merging, the individual storms remained powerful, Bunting said.

Besides reports of damaging winds and preliminary tornado sightings, the weather service has received reports of hail at least an inch in diameter in locations stretching from southeast Minnesota to Virginia, he said. 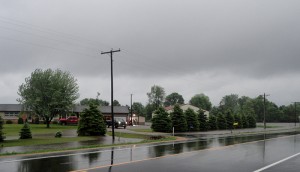 Water floods the ditches and around the home of the residents at 17304 U.S. Highway 65 Wednesday after heavy rain hit the area. –Brandi Hagen/Albert Lea Tribune

In Ohio, storms with swift, straight-line winds soaked parts of the state, knocking down trees and barns and leaving many without power Thursday as commuters dodged fallen branches on roads and faced backups at intersections where traffic lights were out.

Straight-line winds topping 70 mph were reported and more than two dozen tornado warnings were issued as two rounds of storms pummeled the state, but no twisters have been confirmed, said Phillip Johnson, who was part of the team monitoring developments for the Ohio Emergency Management Agency.

Play was suspended at the U.S. Open at Merion Golf Club outside Philadelphia less than two hours after the start of the first round and resumed about three hours later before another brief delay in the evening.

In New Jersey, officials opened the state’s Emergency Operations Center on Thursday morning to monitor the storm’s progress. The weather service issued a flood watch for most of the state. Forecasters predicted 1 to 2 inches of rain will fall on swollen rivers and streams. As thunderstorms rumbled across the southern and central parts of the state, thousands of residents were left without power.

In northern New York, rain sent rivers and streams over their banks, leading to evacuations and road closures.

Early Thursday morning, thunderstorms that punched through northern Illinois caused significant wind damage, mainly in rural areas west and south of Chicago. The city was largely spared. The weather service said intense winds estimated to have reached 70-80 mph in some areas snapped large trees at their trunks or uprooted them entirely.

Whether the storms were a derecho will take time to determine, forecasters said. A derecho is a storm of strong straight-line winds spanning at least 240 miles. The systems are distinctive and take on a comma or bow shape, and usually have a large area of very cold cloud tops not typically seen in an ordinary thunderstorm.

A fifth-wheel trailer came off of its hitch Wednesday evening on Interstate 90 between Alden and Albert Lea. –Rich Mirelli/Albert Lea Tribune

“A derecho is based more on research,” said Evan Bentley, a meteorologist at the weather service office for northern Indiana. “How much damage, how widespread it was.” It could take days to determine whether the storms met the criteria, he said.

Even if the storm wasn’t a derecho, it still brought several tornadoes, large hail and flooding that did some damage Wednesday.

In the small town of Belmond, Iowa, about 90 miles north of Des Moines, Duwayne Abel, owner of Cattleman’s Steaks & Provisions restaurant, said a tornado demolished part of the building. No one was in the restaurant at the time.

“I was, oh, eight miles west of town and I looked toward town and I could see a funnel cloud, having no idea it was exactly where our restaurant was,” Abel said. His wife and an employee were able to get out of the restaurant and sought shelter in a basement.

Nearly a year ago, a derecho led to two dozen deaths, caused at least $1 billion in damage from Chicago to Washington, and left more than 4 million customers without power. Winds reached nearly 100 mph in some places.