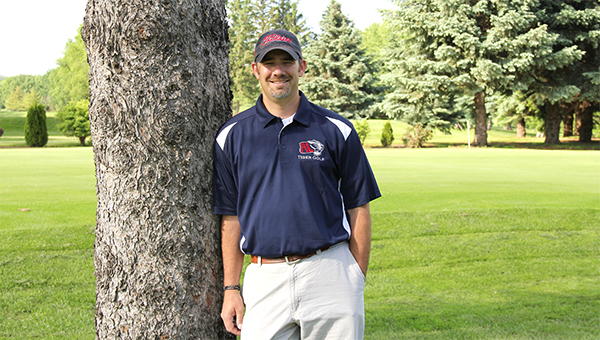 Casey McIntyre’s journey took him across Minnesota and down to Texas, but the Glenville native is back in Freeborn County, teaching and coaching at Albert Lea High School.

Outside the classroom, McIntyre is a husband, father, coach and musical guru.

McIntyre is married to Katie McIntyre, and they have a daughter, Clara. After being an assistant coach under Riley Worth, McIntyre took the reins this season as Albert Lea’s varsity boys’ golf head coach.

The integrity of the sport is one of many reasons why McIntyre plays and coaches golf. 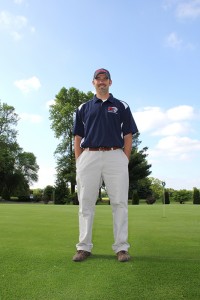 “I feel that you can tell a lot about a person based on their golf game,” he said. “I love that it requires honesty, etiquette, skill and discipline. Each player is responsible for knowing the rules, and sometimes players need to call penalties on themselves. Golf stands apart from all other sports in that way.”

When McIntyre takes the course, he packs his bag full of quality clubs. He has a 5-year-old set of King Cobra S9 Irons, a Titleist 907 D2 driver, a Nike Dyna three-wood, a Cobra Baffler hybrid, 54-degree and 58-degree Titleist Vokey wedges and an Odyssey No. 9 putter. However, McIntyre’s enjoyment of the sport grew long before he had assembled that set of clubs. He began to play when he was 8 in the yard of a childhood friend with his brother, he said.

“My brother Cory was the main influence in my interest in golf. He and his friend Kent Fredrickson set up a six-hole golf course in Kent’s yard,” McIntyre said. “I used to go over and hit balls around with those two. It really got me interested in the game.”

After moving to Mankato when he was in fifth grade, McIntyre played for the Mankato East Cougars golf team in high school, he said. When he was 25, McIntyre decided to move to Dallas, Texas, to play music with his band. McIntyre contributed vocals and played drums in the band 3 in a Tree. A highlight of his musical career was when 3 in a Tree opened for Bon Jovi at the Xcel Center.

McIntyre moved back to Minnesota and completed his master’s degree in education at St. Mary’s University in Winona. He accepted a job offer as a special education teacher with an autism focus at Lakeville for one year, before he took his current position in Albert Lea.

Despite a shortened season due to snow and rain, McIntyre described the Tigers’ season as a success.

“We had a stretch of four tournaments where we shot in the low 300s,” he said. “We found our stride in the middle of the season when we began to synchronize as a team and put four low scores together.”

The Tigers had a big win late in the season in a dual against United South Central at Rice Lake Golf Course. Albert Lea defeated the Rebels by six strokes (311-317). The loss was the lone blemish on USC’s record. Lucas Peterson, Brent Nafzger, Sam Chalmers and Albert Lea’s only senior, Nate Stadheim, contributed to the score.

Changing from an assistant coach was a challenge, McIntyre said.

“At times it was overwhelming, but I feel like I was able to rise to the occasion and ensure that all responsibilities were fulfilled,” he said.

Albert Lea High School Athletic Director Chris Chalmers said McIntyre did a good job and that the district and students are lucky to have him.

“Casey is a passionate teacher and coach,” Chalmers said. “He stepped up and guided the team through a chaotic season of poor weather.”

Three juniors, a ninth-grader and an eighth-grader contributed regularly on this year’s roster, so the future looks bright for the Tigers. At the section tournament, Albert Lea earned fifth place out of 12 teams.

McIntyre follows professional golfers Freddy Couples and Tiger Woods. He watches Couples because of his smooth swing and Woods because he has been dominant, he said.

McIntyre hopes his fondness for golf spans generations and aspires to play with Clara someday.

“Last year, I played 25 18-hole rounds,” McIntyre said. “I plan to play more once my daughter gets old enough to play with me. Hopefully she will love the game as much as I do.”

Interesting fact: McIntyre’s played drums for the band 3 in a Tree. The group opened for Bon Jovi at the Xcel Center.