Funeral services for Georgia H. Nyenhuis, age 83 of Albert Lea will be at 11 a.m. Tuesday at St. Mary’s Catholic Church in Geneva. The Rev. Swaminatha Pothireddy will officiate. Burial will be at the Bohemian National Cemetery. Visitation will be from 5 to 7 p.m. Monday with a prayer service at 6:30 p.m. at Bayview/Freeborn Funeral Home and one hour prior to the services at the church. Online condolences are welcome at www.bayviewfuneral.com 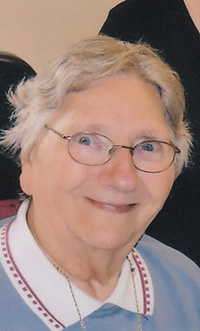 Georgia Henrietta Nyenhuis was born on Nov. 8, 1929, in Albert Lea, the daughter of Harry and Henrietta (Renchin) Kermes. She attended school in Hayward and graduated from Albert Lea High School in 1947. On Oct. 9, 1954, Georgia was united in marriage to Henry Nyenhuis at St. Theodore Catholic Church. She was a homemaker and worked beside her husband on the farm for more than 40 years. Georgia also worked as a sewer at Munsingswear in Albert Lea from 1947 until 1955.

She enjoyed farming, raising her family, gardening, sewing clothes and quilts. After a farm accident in 2002, Georgia made her home at St. John’s Lutheran Home where she enjoyed reading, gardening and many other activities including learning to knit after she turned 80. She was a member of St. Mary’s Catholic Church and the Farmers Union, where she served as secretary-treasurer. Georgia was past president of the Women’s Group at St. Mary’s Church, past secretary of the Farmers Union and served on the gardening committee at St. John’s. Christian faith was a strong point in her life. She enjoyed visiting and talking to people, birdwatching, reading, making sauerkraut and storytelling.

The family would like to express their thanks for the love and care shown Georgia while she was a resident at St. John’s.