Grizzlies rally to take down Panic 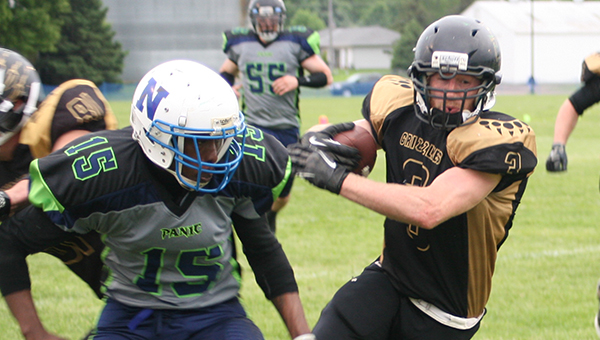 Albert Lea Grizzlies running back Jason Kuipers tries to get to the outside as Deneri’o Hill of the Panic attempts to bring him down during a 28-27 Grizzlies win Saturday. Kuipers rushed for the go-ahead touchdown with eight minutes left in the fourth quarter.Kuipers rushed for 105 yards on 24 carries. — Submitted

The Albert Lea Grizzlies of the Southern Plains Football League won their third straight game of the season by edging the Panic from Nicollet, Iowa, 28-27.

The Grizzlies capped their opening drive with a one-yard quarterback sneak by Tony Tolbers, but the Panic fought back to take a 13-12 lead at the half.

The Panic extended their lead to 15 points (27-12) in the third quarter, but the Grizzlies rallied.

Another quarterback keeper by Tolbers made the score 27-20 at the end of the third.

Early in the fourth, the Grizzlies took advantage of a bad snap to get a safety. With eight minutes remaining in regulation, Jason Kuipers scored on a three-yard touchdown run to give Albert Lea its first lead since the first quarter.

Albert Lea improved to 3-2 overall and handed the Panic their second straight loss.