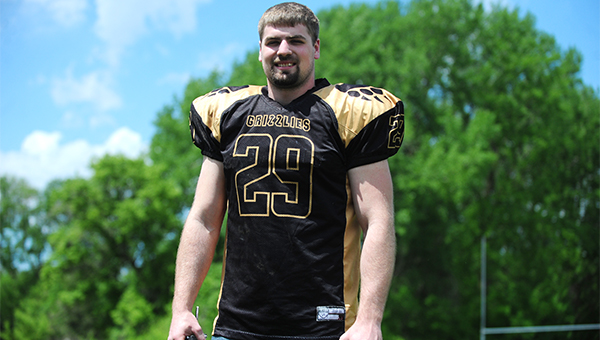 J.D. Seiler or the Albert Lea Grizzlies stands near a goalpost Friday on a football field at Brookside Elementary. Seiler is a first-year player for the Grizzlies. — Micah Bader/Albert Lea Tribune

When he’s not working 250 feet in the air on a wind turbine, J.D. Seiler can be found on the gridiron as a defensive end for the Albert Lea Grizzlies.

Seiler has been making up for lost time on the football field. He’s a rookie for the Grizzlies, and he didn’t play football at Albert Lea High School. However, the former prep wrestler and recent graduate of Riverland Community College hasn’t taken long to get acclimated to the sport. 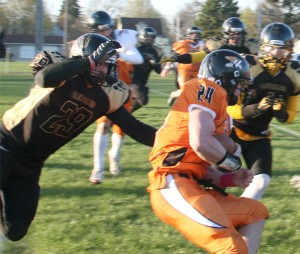 J.D. Seiler, left, tracks down a ballcarrier from the South Central Hawgs earlier this season. Seiler didn’t play prep football, but his uncle is the head football coach at Fairfield High School in Pennsylvania. — Submitted

“He’s caught on and grown faster than any other player that we’ve seen,” Albert Lea offensive lineman Craig Schmidt said. “Our coaches and veterans have been good about letting him know his responsibilities.”

To get to know the game, Seiler did research.

“Mostly I’ve learned from watching in practice and trying to figure it out,” he said. “The guys are great at explaining what I need to do. After that, it’s up to me.”

With his wrestling background, the physical part of the game is second nature to Seiler. His football pedigree doesn’t hurt, either. Seiler’s father coached football and his uncle, Darwin Seiler, is the current head coach for Fairfield High School in Pennsylvania.

“Football runs in the family,” he said.

“He’s a guy with a lot of fire and attitude on the field,”Schmidt said. “He’s a big athletic guy who isn’t a stranger to contact.”

Seiler’s other favorite player is retired running back LaDanian Tomlinson, the 2006 NFL MVP. 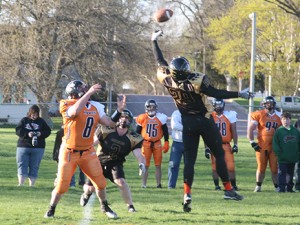 After J.D. Seiler of the Albert Lea Grizzlies dropped back into pass coverage, he attempts to break up a pass against the South Central Hawgs this season. — Submitted

“I’ve always liked him, and I’ve always thought he had a lot of class,” Seiler said. “He conducted himself well and didn’t seem to be arrogant.”

Seiler’s favorite part of playing for the Grizzlies is having the opportunity to play in games, but he said he also enjoys practice.

“Practice is always fun — both with wrestling and football,” he said. “I feel like I learn the most when I’m practicing, and it’s aways fun to see how the things you learn in practice can benefit you in a game.”

When Seiler joined the Grizzlies he only knew one person: Hable. Now, he knows the guys and one of his favorite parts of being with the organization is hanging with them after games.

After his graduation, Seiler was hired by Vestas as a service technician for wind turbines.

“It’s a lot of cleaning, changing filters and torquing bolts. That kind of stuff,” he said.

Results from the Grizzlies’ game against the Minnesota River Valley Shock will be posted to AlbertLeaTribune.com and will be published in the Monday edition of the Tribune.

Albert Lea lost its first two games of the season: 20-12 to the North Iowa Bucks and 19-0 to the South Central Hawgs. Both games were on the road. The Grizzlies have bounced back with a 28-7 win over the Buffalo Ridge Wildcats in their home opener May 22.