Gun crime is rare in A.L., but permits are on rise

Editor’s note: This is the third in a six-part series about guns.

As former Freeborn County Sheriff Mark Harig sat in his office on Nov. 3, 2003, a call came through the radio that sheriffs hope never to receive.

One of his deputies, Scott Golbuff, said he needed help and was under fire by a man who had robbed the Farmers State Bank in Freeborn. The man, identified as Gary Allen Reichow of Alden, had fired shots with an AK-47 assault rifle both inside and outside of the bank, loudly demanded money and then fled the scene with $10,000. 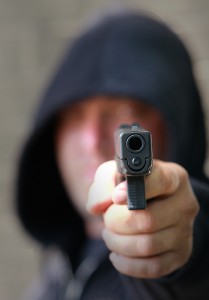 Police officers and sheriff’s deputies train for situations where criminals make use of firearms in executing their crimes. –Brandi Hagen/Albert Lea Tribune

Golbuff was the first deputy to spot Reichow’s car, which had been followed from the bank by a utility company employee, but before Golbuff could exit the car, Reichow fired several rounds into it.

“Most all of us that were on that day headed for Freeborn to find Scott and back him up,” Harig said.

Deputy Ryan Merkouris was the second car to arrive, and Reichow turned to fire at him when he pulled up.

“When you’re responding to it, you’re having a high adrenaline rush,” said current Sheriff Bob Kindler, who was a detective at the time. “There’s some frustration that you can’t get there soon enough.”

When Harig arrived at the scene, he said Golbuff only had three out of 39 shots remaining. Reichow fled to some nearby woods, and Harig used a public address system to ask him to surrender. Reichow complied.

Golbuff received a minor injury to his leg, and Reichow was injured by a shot under his chin.

Training for the worst

Though there hasn’t been a shooting involving a semi-automatic assault rifle since the bank robbery, the threat is always looming.

Albert Lea Public Safety Director Dwaine Winkels said officers face their highest threat on the job when they respond to a situation involving a gun. Because of this, officers and deputies in both the Albert Lea Police Department and Freeborn County Sheriff’s Office go through regular firearms training.

For the Police Department, training is usually twice a year as a department at a shooting range near the Albert Lea airport, and as often as possible individually, said Lt. J.D. Carlson. Officers also have access to a shooting range in the basement of the Law Enforcement Center.

The training as a department includes reviewing use of force statutes, conducting scenario-based shooting and simple target shooting.

Carlson said officers try to introduce a sense of the unknown into the training drills to make them seem as lifelike as possible.

With the Sheriff’s Office, the department typically goes through annual training, working on many of the same skills as the Police Department, focusing on how to resolve conflicts, whether the conflict may involve a gun or some other type of weapon, Kindler said.

Training for the four-county South Central Drug Investigative Unit SWAT team — which involves Steele, Waseca, Faribault and Freeborn counties — expands on the department training and is more team-focused, said Carlson, who is the commander. 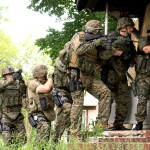 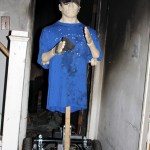 A mannequin with a gun is attached to a robot to act as the hostage taker in a mock SWAT rescue situation. The mannequin gives officers a person to shoot at during practice. 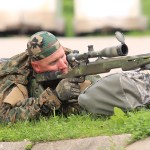 SWAT team member Tim Schroeder of the Waseca Police Department practices the role of a sniper during SWAT training on William Street earlier this month. 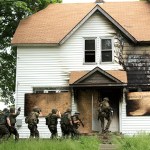 SWAT team members file into a house at 816 W. William St. in Albert Lea on June 12 to rescue a hostage in a mock situation. The vacant home had been previously burned and used for a Minnesota State Fire Marshal fire investigation class in April. 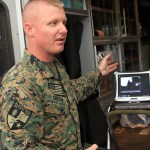 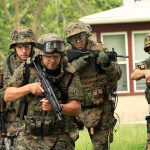 Jesus Cantu leads a group of SWAT team members into a home at 816 W. William St. on June 12 to rescue a hostage in a mock situation.

During a training on June 12, the team of about 20 officers practiced hostage scenarios, utilizing a mannequin connected to a robot as the perpetrator and an officer acting as the hostage.

Their guns were not loaded with real ammunition.

In regular duty with the Police Department, each officer carries a Smith & Wesson M&P .40-caliber handgun, and in each squad car there is a shotgun and an AR-15 assault rifle, Carlson said.

With the Sheriff’s Office, each deputy carries a Glock .45-caliber pistol and has a 12-gauge shotgun and an M4 tactical rifle in the squad car, Kindler said.

“Each weapon has an application,” he said. “The sidearm is available for close use, and the shotgun has a longer range but not as long as the rifle.”

Face to face with danger

Officials with both departments said guns are involved in only a small portion of crimes committed locally.

Carlson said the Police Department receives more calls of crimes involving fake guns or look-alike guns — such as BB guns or airsoft guns — than it does real guns.

When guns are used, it is often in domestic situations or in threats of suicides — as opposed to crimes that could involve the public, he said.

The last homicide in Albert Lea with a gun was in May of 2005, when Robert Michael Hughes killed his estranged wife, Tammy Hughes, 30, with a pump-action 12-gauge shotgun in the couple’s home on Sheridan Street.

Robert Hughes was convicted of first- and second-degree murder in the case in 2006 and was sentenced to life in prison without parole.

The last homicide in the county by a gun was in October of 2001 in the murder-suicide of Paul Robert Rhodes and his wife Sheryl Ann Rhodes in Hayward. Both were 33.

The Freeborn County Sheriff’s Office determined that the husband killed his wife, then committed suicide.

A relative found the two bodies in their home at 214 Third St.

Winkels said the last time an officer with his department shot a person was in November of 2001 when Albert Lea resident Randall Caron reportedly charged at that officer with a knife.

Officers had been looking for the man after he stabbed his girlfriend, Annette Lestrud, the day before at her apartment on East Front Street. She obtained multiple wounds that required more than 500 stitches.

The officers found Caron hiding in a wooded area near Railroad Avenue, and he started lashing the knife at one of the officers. That officer, Jesus Cantu, fired twice at the man. One bullet went through Caron’s chest and the other scratched his head, according to Tribune archives. Caron’s injuries were nonfatal.

Cantu was placed on administrative leave following the incident but that leave was lifted after the Minnesota Bureau of Criminal Apprehension completed its investigation into the shooting.

Winkels said any time an officer discharges a gun — at any thing or person — a report must be filed.

He noted the most recent officer shootings have involved aggressive dogs charging at officers.

Gun permits on the rise

In the last year, permits to purchase and carry handguns have increased significantly in Freeborn County.

According to records, the Freeborn County Sheriff’s Office issued 238 permits to purchase a handgun in 2011. That number jumped to 368 in 2012 and is already at 242 through June 4.

Permits to carry a handgun, which are handled by the Sheriff’s Office, have seen significant increases since 2010, when the sheriff issued 64 permits, compared to this year when the sheriff has already issued 243, as of June 4.

Winkels said he thinks the increase can be attributed to fear of new gun restrictions being passed at state and federal levels.

Kindler said he thinks the Sandy Hook Elementary School shooting in Newtown, Conn., last December has been a catalyst for increased gun sales. It brought about a renewed national conversation about guns.

Winkels said he thinks at a minimum there should be background checks on all gun sales — whether through a dealer, at an auction or even in private sales.

When asked how officers would enforce the checks on private sales, he said they would charge people who were found to be in violation.

He said he also thinks there needs to be more firearms training.

Albert Lea police officer Dave Miller, who has been with the department for about six years, said he does not think there should be any changes to gun control policy in the country, noting that the gun laws already in place are capable of handling any issues that may arise. He cited FBI records that state gun crime is going down nationwide.

Miller said he has never been to the scene of a homicide involving a gun, but he has been to calls with the SWAT team of shots fired or when people barricade themselves from police.

He said the major percentage of people who are committing crimes with guns are already breaking the law by possessing the gun or possessing a stolen gun.

Carlson said he thinks there is a large loophole when someone is required to go through all sorts of checks to purchase a gun but then can turn around and sell it privately without any checks.

Kindler said he would like more gun control to go back to the sheriffs. He thinks sheriffs, who are in charge of issuing permits to carry, should be able to deny permits for a just cause. Minnesota is one of 39 states with what’s called “shall-issue” laws.

“We know the people of our area probably better than anybody,” he said.

He also does not like that some people who were charged with assaults can plead to a lesser charge and not have their gun rights taken away.

Miller said while he understands Kindler’s apprehension, he disagrees.

“In a free society you can’t micromanage your citizens,” Miller said. “People have to be allowed to have their freedom, and because of that some mistakes are going to happen.”

Harig said that is what ultimately happened to Reichow.

“Gary made a mistake,” Harig said. “He should have known better than that.”

Reichow was ultimately sentenced in U.S. District Court to consecutive prison time of 12 years for armed bank robbery and 10 years for discharging a firearm in relation to a crime.

Gun permits by the numbers

— Information from the Bureau of Criminal Apprehension annual reports