Hundreds show for Wind Down 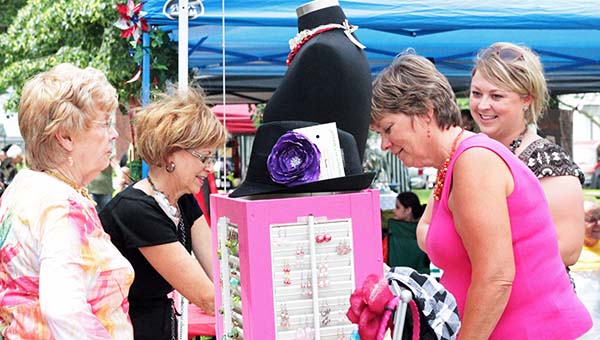 Laura Lunde, right, talks with customers at her booth at Wind Down Wednesday. Lunde had jewelry for sale.
–Erin Murtaugh/Albert Lea Tribune

Early-morning rain and warm weather didn’t keep hundreds of area residents Wednesday from checking out the first of three Wind Down Wednesday festivals slated for the summer.

Set up in Central Park because of construction downtown on Broadway, the festival featured live entertainment, 24 arts and craft vendors from in and out of town and food from at least five vendors throughout the day.

“I love that Albert Lea is doing something to be out in town,” said Albert Lean Stassy Adams. “I think this is great. I love that people have their own businesses and that we can support them.” 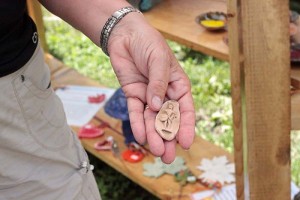 Susan Bartley of Nana’s Enchanted Garden shows a piece for sale Wednesday at Wind Down Wednesday in Central Park.

Designed after a weekly festival in Rochester called Thursdays on First, Wind Down Wednesday was set up along the sidewalks of the park like an outdoor market. In the middle of the park there were the arts and crafts, on another part was the food and in yet another part there was music.

Tami Staker, one of the organizers, said she thought the festival went well and she was happy there were sunny skies.

“We feel really blessed with how the weather has turned out,” she said.

Vendors were met with rain as they set up their booths Wednesday morning, but that rain dissipated shortly after.

One vendor, Susan Bartley of Albert Lea, who owns Nana’s Enchanted Garden, said she decided to participate to support her community. 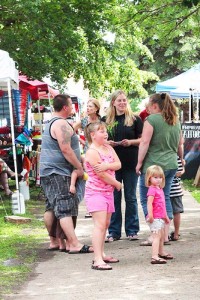 A group of people gather on the sidewalk of Central Park as a part of Wind Down Wednesday. A variety of vendors had booths set up during the event.

She encouraged children to come into her booth to check out her pottery so they could also learn about art.

Down the sidewalk, Susan DeVries was out selling her butterfly stones, greeting cards, crochet work and decorated animal stones.

“This is a really great event for Albert Lea,” DeVries said.

Her first time as a vendor in the festival, she said she also plans to participate in the July and August festivals.

Sara Cura of Minneapolis, who was selling jewelry and buttons, was also at the festival for her first time.

She, too, was planning to attend other festivals throughout the summer.

Other booths ranged from jewelry to tie-dyed clothing to soap and tattoos. There were also stained glass, henna and photography.

On the stage, there were 3 Wheels and a Flat, Paul Christian and Steve Sullivan & The Factory. A small group of attendees participated in Zumba in the afternoon.

Other Wind Down Wednesday festivals are slated for July 17 and Aug. 21.