In the hunt for a title 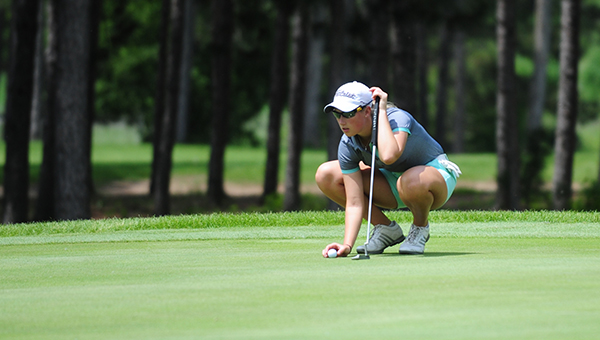 Megan Pulley, a senior from Albert Lea, checks the slope of the green Tuesday at Bunker Hills Golf Course in Coon Rapids at the Class AAA state golf tournament. Pulley won a tie-breaker at the Section 1AAA tournament to secure her spot at state. On Day 1, Pulley shot a 37 on the front nine and a 42 on the back nine to tie her with six other golfers at 11th place in the field of 88. Day 2 will feature 18 more holes. — Micah Bader/Albert Lea Tribune

COON RAPIDS —Albert Lea senior Megan Pulley set herself up to challenge for a state championship. 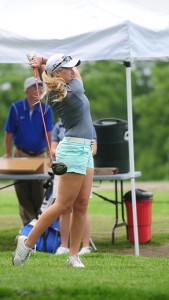 Megan Pulley of Albert Lea tees off on the first hole of the front nine at Bunker Hills Golf Course in Coon Rapids as part of the Class AAA girls’ state golf tournament. Pulley is in 11th place after Day 1. — Micah Bader/Albert Lea Tribune

Pulley finished Day 1 of the girls’ Class AAA state golf tournament at Bunker Hills Golf Course in Coon Rapids Tuesday in a six-way tie for 11th-place in the 88-player field.

“She’s playing great and swinging with tons of confidence,” he said. “That’s exactly what we need.”

Pulley is eight strokes behind the Day 1 first-place finishers. Alex Schmid of Shakopee and Sarah Burnham of Wayzata each shot 35 on the front nine and 36 on the back nine to share the Class AAA lead with 71 strokes.

Pulley will have a chance to move up in the standings today during the second 18 holes.