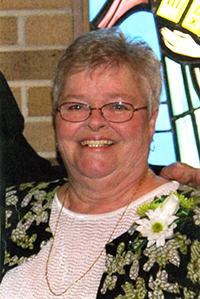 On Jan. 10, 1966, Joan was united in marriage to William “Bill” Shafar. Their first home was in Buffalo Center, Iowa. They made their home in West Union, Iowa, in 1972. Bill and Joan were blessed with four children, Tim, Justine, Bill Jr. and Cyndi. They also had a son who died at birth, Brian. Joan was a wonderful wife and mother who created a loving home for her family.

Joan loved spending time with her family, especially her grandchildren, who loved to eat her homemade noodles, salsa and rhubarb jam. Hobbies that brought her joy were cross-stitch, quilting and playing the guitar. She also enjoyed going to the lake and fishing, picture puzzles and fussing at Dad.

She was preceded in death by her parents; a son, Brian; and sisters, Beverly Baller, Harriet Potter, Karen Hanson and Kathleen and Elaine Studelska; and brother, Richard Olson.