Lake Mills pulls away from Belmond-Klemme in 6th 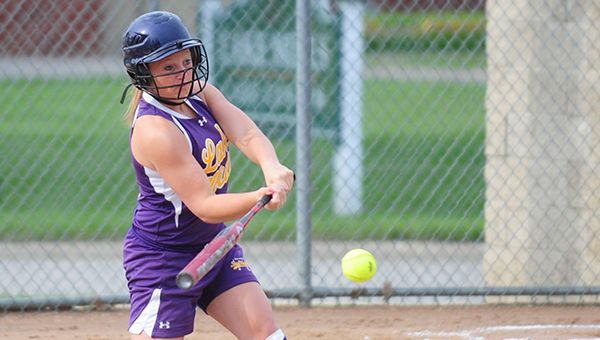 Sarah Orban, a junior from Lake Mills, swings at a pitch during the Bulldogs’ 12-3 win Friday over Belmond-Klemme. Orban led Lake Mills at the plate with three hits and two RBIs Friday against the Broncos. — Micah Bader/Albert Lea Tribune

The Bulldogs took a 1-0 lead after the first inning. The Broncos tied the game top of the third, but Lake Mills rebounded with three runs in the bottom of the third to take a 4-1 lead.

Going into the bottom of the fifth, Lake Mills led 6-3, The Bulldogs extended their lead to four runs and added five more in the sixth to preserve the win.

“We played well tonight,” he said. We pitched, hit and played good defense.”

Defensively, coach Orban said he was impressed with the play of the infield.

“Cede Byrnes played well at first base,” he said.

Emily Orban pitched all seven innings for the Bulldogs. She struck out six batters and allowed four walks and three hits.

Sarah Orban led Lake Mills at the plate with three hits — including two doubles — and Jurnee Peña and Katlyn Eidness each had two hits.

The Bulldogs had production throughout their lineup. Eight batters earned hits.