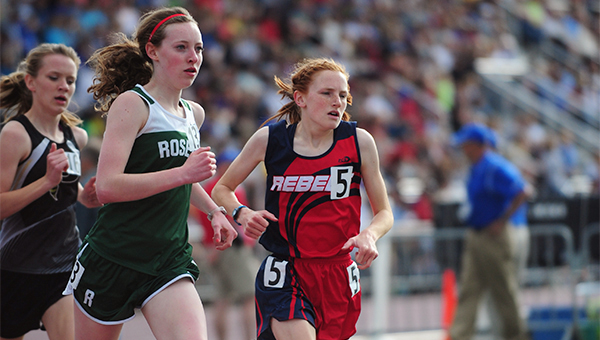 Emily Mantor of the United South Central/Alden-Conger girls’ track and field team competes in the 3,200-meter run Friday at the state track meet hosted by Hamline University. Mantor earned fifth place at state for the second straight season. She ran a personal best time of the season: 11:17.60. Her seed time was 11:32.93. — Micah Bader/Albert Lea Tribune

ST. PAUL — Emily Mantor of United South Central/Alden-Conger proved that strong and steady was enough for her second straight podium finish in the 3,200-meter run Friday at the state track meet hosted by Hamline University.

The field of 16 runners began with a fast pace, but Mantor wasn’t fazed. She kept her normal stride and climbed the ladder to take fifth place after much of the field was gassed from the blazing start. It wasn’t Mantor’s original plan.

“That’s just the way it happened,” she said. “But, I think that actually works best for me.”

Fifth place duplicated how Mantor finished last year as a sophomore at state. However, she improved her time as a junior by shaving off 8.49 seconds from last year’s time by finishing the race in 11.17.16. Her seed time (previous best time this season) was 11:32.93.

Mantor met her goal of finishing in the top nine.

“I’m happy with how I ran,” Mantor said. “Placing higher than last year didn’t really matter so much to me.”

In preparation, Mantor and her coaches didn’t stray from what they had done all year.

“We didn’t change it up too much,” she said. “I just made sure that I got enough miles in a week, because I didn’t want to back off too much.”

A typical workout consists of running three to four miles. Mantor said she has done interval training by running 400- and 800-meter runs back to back, but she likes the longer distance workouts.

Clare Flanagan of the Blake School was the Class A state champion with a time of 10:27.85.

The Monday edition of the Tribune will feature coverage from Day 2 of the state track and field meet. Shot put results from Mantor’s teammate Amanda Allis will be published Monday.