Mary Lou Weydert of New Richland will be at 11 a.m. Thursday at the All Saints Catholic Church in New Richland. The Rev. Swaminatha Pothireddy will officiate.Visitation will be from 9:30 a.m. Thursday until the time of service at the church. Interment will be in the Calvary Cemetery, New Richland. 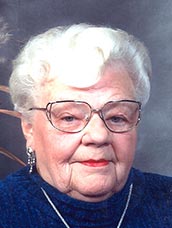 Mary Lou was born Aug. 27, 1926, the daughter of Bert and Ethel Lurth. She attended country school and graduated from high school in St. Peter, in 1944. She was united in marriage to James Weydert on April 26, 1950.

Mary Lou loved to work and being around people. After high school she worked for Minnesota Valley Natural Gas and NSP. Mary Lou and Jim farmed from 1950 until 1970. Together they owned and operated the local bowling alley in 1970. Mary Lou went to school for being a beautician and opened shop in the basement of the bowling alley. She was city clerk for the city of New Richland from 1977 until 1993 when she retired. She then worked part time for the New Richland Care Center from 1995 until 2005.

Mary Lou was a member of the New Richland American Legion Auxiliary and the All Saints Catholic Church. Her hobbies included fishing, playing cards, golfing and bowling. She also loved watching sports.

Mary Lou is survived by her daughter, Lyn Baker and husband Richard of Owatonna; and her son, Brad of Denver, Colo.; three grandchildren, Darian Baker and his wife Candy of Geneva and Kaitlyn and Benjamin of Denver; two great-grandchildren, Oakley and Elli Baker of Geneva; one sister, JoAnn Oldenburg of Nicollet; and one sister-in-law, Sylvia Pettis of Mankato.