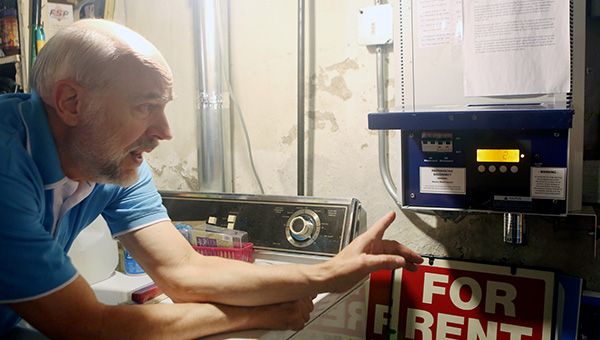 Christopher Childs describes the inverter that converts solar power to usable electricity at his home in St. Paul on June 7. — Jeffrey Thompson/MPR Photo

ST. PAUL — Elizabeth Dickinson and Christopher Childs insist they aren’t early adopters of solar energy. They put solar panels on their home in 2007 — years after Dickinson’s parents installed a solar hot water system on their home in the 1970s.

Still, the investment into their 1911 home on St. Paul’s West Side would make most Minnesota homeowners gape: Six years ago they paid $18,000 for a system of solar panels they bought second-hand, and that’s after $2,000 in tax credits.

So far, they’ve saved roughly $2,700 on electricity. At this rate, the pay-off point won’t come for another 34 years.

“If we had only done it for financial reasons, then I’d be concerned,” Childs said. “But we had so many other considerations.”

The couple care deeply about the environment. Besides cost savings, the inverter box on their solar energy system calculates how many tons of carbon dioxide emissions they’ve avoided: 12.5 tons.