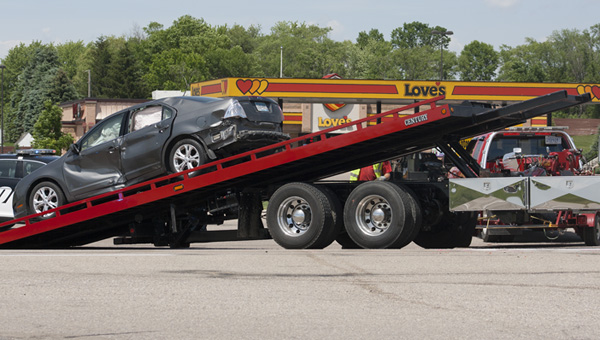 A car is loaded onto a flatbed trailer to be towed away from the scene of a car versus motorcycle crash on Freeborn County Road 46 Wednesday afternoon. — Sarah Stultz/Albert Lea Tribune

A 20-year-old Clarks Grove man was airlifted to St. Marys Hospital in Rochester Wednesday afternoon after his motorcycle collided with a car on East Main Street in Albert Lea.

Dylan A. Hanson was not wearing a helmet, and his condition as of this morning was fair. 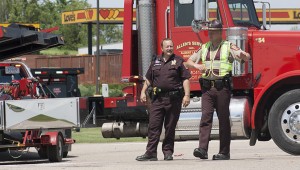 He was reportedly traveling eastbound on East Main in a 2000 Harley-Davidson Road Street when a 2012 Ford Fusion, driven by Donald R. Bell, 70, of Dodge Center, proceeded north from the stop sign on 775th Avenue out of the Trail’s Travel Center parking lot into Hanson’s path.

Hanson struck the car broadside, according to the Minnesota State Patrol.

Bell was injured and was treated at Mayo Clinic Health System in Albert Lea. The State Patrol listed both men as having injuries that were not life-threatening.

The crash reportedly took place at 1:52 p.m. The State Patrol is continuing to investigate.