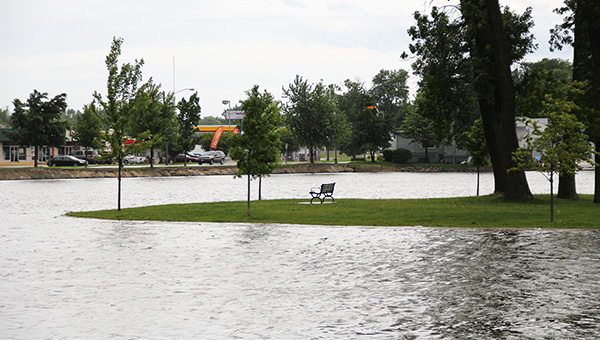 Immediately after a thunderstorm moved through Albert Lea on Saturday afternoon, water creeps up the shore of Katherine Island, a common way for measuring high water on Fountain Lake at a glance. — Tim Engstrom/Albert Lea Tribune

The Freeborn County Sheriff’s Office on Thursday issued a ban on motorboat wakes for Fountain Lake, including Edgewater Bay.

The wake ban comes as a result of high water, according to a Sheriff’s Office news release. For much of the spring, boaters have had limited time going fast on Fountain Lake because of restrictions.

“Conditions exist that the water will continue to rise for several more days. High water will deteriorate shorelines and damage docks, boats and lifts, additional avoidable waves will only accelerated deterioration and increase damage,” the release states.

Signs that remind boaters of the restrictions were posted at the two boat landings, and there are floating signs on the main body of Fountain Lake and on Edgewater Bay.

The signs will come down when the restriction is removed.

Man held on charges and other reports