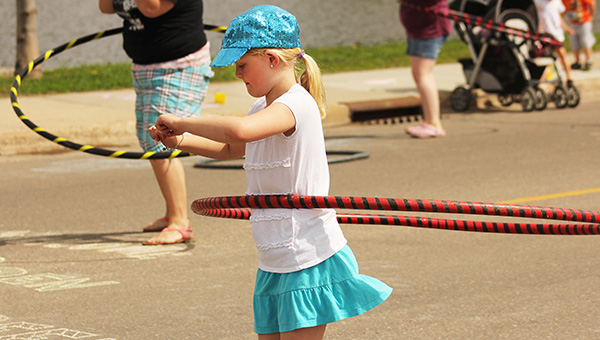 Albert Lea residents young and old alike took to the Blue Zones Walkway on Saturday as part of a new activity for what was called Open Streets Albert Lea.

Starting on Bridge Avenue and walking or biking along Fountain Lake to the Brookside Boathouse, people were invited to stop at checkpoints on the trail and collect items from area businesses — all with the goal of promoting wellness.

It was a scavenger hunt of sorts put on by the worksite wellness committee of the Albert Lea-Freeborn County Chamber of Commerce.

People who completed the hunt could register for a grand prize gift basket.

Stanley and Cindy Farr, co-chairwoman of the Innovance committee, said they decided to take part in the event as a way to promote healthy living for their employees. They were the first stop around the lake for participants after picking up a plastic bag donated by Mayo Clinic Health System in Albert Lea and Austin to collect the prizes. 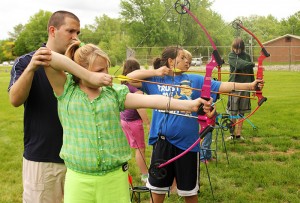 The company also offered an incentive for their employees to come to the event and take part in the walk. They could be up for a day of paid time off or a gift certificate for Innovance clothing.

Down the walkway, at City Beach, two employees from Alliance Benefit Group sat with one representative from Cargill. Kellie Jordahl of Alliance Benefit Group said her company was nearing the end of an eight-week health challenge. The employees split up into teams and each team was represented by a race car placed around a track. For different achievements they could move the car forward.

Jordahl said she was pleased with how many people participated in the hunt.

“I was very surprised at how many people have come through,” she said.

Toward the end of the hunt near the Brookside Boathouse, two employees of The Children’s Center were stationed on the trail. People could spin a wheel and win prizes. 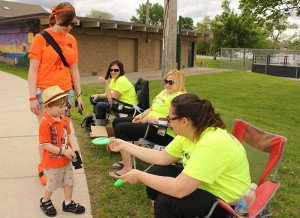 Brenda Reed, family services coordinator, said the organization offered employees $5 for attending and families who attend the center could get $5 off tuition.

“We really want kids to be healthy and families to do healthy things,” she said.

By the end of the walk, participants walked away with pencils, pens, Frisbees, pop can holders, pedometers and even light bulbs.

In addition to the scavenger hunt, other activities taking place were giant hula hoops, a bike skills course, Zumba and yoga demonstrations. Disc jockey Dave Nelson provided music, and several of the neighboring businesses hosted other contest giveaways and activities.

Bridge Avenue from Fountain Street to Ruble Street was closed for the event.

The Open Streets project is part of a long-term statewide health improvement initiative through the Center for Prevention with Blue Cross and Blue Shield of Minnesota.

During Open Streets events, a street is temporarily closed to vehicle traffic to allow families and neighbors to come together for an afternoon to mingle, have fun and shop in a safe, car-free environment. The main goal is to encourage residents, including people who are not regularly active, to experience their community in a new way — by foot or some other form of nonmotorized transportation.