Oak Park Mall behind on taxes

By Jason Schoonover and Adam Harringa

AUSTIN — Oak Park Mall’s owners have until June 30 to pay roughly $378,171 in unpaid property taxes, or the building will forfeit July 1 and be taken over by the county. However, that doesn’t mean the mall would close immediately, or possibly at all. 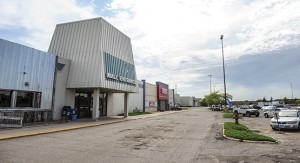 The Oak Park Mall is getting dangerously close to foreclosure, owing $474,847 in property taxes. Should those taxes remain unpaid then the mall will come under the temporary ownership of Mower County. –Eric Johnson/Albert Lea Tribune

The Mower County Board of Commissioners voted 5-0 Tuesday to allow Auditor-Treasurer Doug Groh to prepare the county to take over the mall July 1.

Groh will send notices to mall tenants of the looming forfeiture by early next week. If the property forfeits, the tenants’ leases with owner Oak Park Mall Ltd. Partnership will cease. County officials are preparing new leases for businesses in the mall, should the owners or the lean holder, Cole Taylor Bank, fail to pay.

“We hope we don’t end up with it,” said Board of Commissioners Chairman Jerry Reinartz, adding that it would be the largest forfeiture the county has ever had.

County commissioners said they are not enthusiastic about taking ownership.

“I don’t think the county should be in the property management business,” Reinartz said.

However, Reinartz and other commissioners said they aim to keep the mall open and operating.

The county could opt to close the mall, but that would displace all the tenants — including the county’s Department of Health and Human Services office renting space there.

“You don’t want to do that,” Commissioner Mike Ankeny said. Other commissioners agreed, noting it would be detrimental to the city’s business community.

Commissioners said they would then look to sell the property as quickly as possible, which would take a minimum of 90 days.

“If it comes to it, we get rid of it right away,” Ankeny said.

Including the first half of this year, Oak Park Mall Ltd. owes $474,847 in unpaid taxes. The group can avoid forfeiture by paying $378,171 in delinquent taxes or by entering a confession of judgment, which means paying 2013 taxes in full and paying 20 percent of the delinquent taxes followed by payments over five years. With a confession of judgment, the owners must stay caught up.

Groh told the board he originally had the impression that the bank or Graff would pay, but from recent talks, he’s not as certain.

“I got the indication that there’s cash flow problems,” Groh said of talking to Graff.

Groh has also been in contact with Cole Taylor Bank, but said the group may let the property forfeit and then look to repurchase it.

“Based on that conversation, I need to make a contingency plan and inform the board,” Groh said.

The unpaid taxes dating to 2009 are due on lots 1 and 11 of the mall, which includes Younkers, the CineMagic 7 movie theater and most of the mall building. It does not include Shopko, which is owned by the retailer. The county’s assessed property tax value of lots 1 and 11 is more than $2.5 million in 2013.

To Bryan Sieve, vice president of finance at Odyssey Entertainment LLC, the theater’s owner, contingency plans may be a moot point.

“I have the sense that it will work out,” he said.

In the unlikely event the mall does close, Sieve said, Odyssey would look to build a new theater in Austin, as the company spent several hundred thousand dollars switching to digital projectors in October 2012.

“We just upgraded, and it would not be in our interest to leave Austin,” he said. “We enjoy doing business in Austin.”

The county or another local agency would also have to temporarily hire on mall staff, like manager Shan Kehret. However, the board is looking for them to be contracted through a group like the Austin Area Chamber of Commerce, the Development Corporation of Austin or Vision 2020, as Coordinator Craig Oscarson told the board that the employees would be eligible for county benefits if the county directly paid them.

Laura Helle, Director of Vision Creation with Vision 2020, said the group has been following the mall’s situation, as it fits into the Vision 2020 Business Friendly Environment project statement of “emphasizing reuse of the underutilized buildings on both sides of 18th Avenue Northwest.” Helle didn’t rule out having Vision 2020 step in and repurpose the mall if it closed, although she said there are no definitive plans.

“In a theoretical world if the mall became available, we would consider what it would be best used for,” she said. “It’s all theoretical though if the owner pays the bill.”

If the property forfeits, the owner can go to the board to pay off taxes and seek to repurchase control of the property. However, Groh described that option as a privilege of the owners, not a right. The county board can deny the request based on whether the repurchase is in the best interest of the public and whether the owners faced undue hardships when unable to pay the taxes.

Groh is also working to ensure that the county’s insurance through Minnesota Counties Intergovernmental Trust Regional Risk Management will cover the property and continuing operations at the mall.