Rain turns the roof into a percussion instrument

“Everything is nearly copacetic. Pop weighs himself every morning. I noticed him standing on the bathroom scale, holding in his ample stomach. I told him that I didn’t think that would help much.” 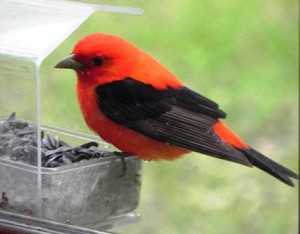 Photo of a scarlet tanager by Al Batt.

“He thought that by sucking in his stomach, he’d lose weight?” I say.

“That’s what I thought he was up to, but he was holding in his stomach just so he could see the numbers on the scale. I took the old codger to the doctor as a Father’s Day present. Pop complained of a terrible pain in his leg. The doctor told him that there was nothing he could do about it. It was due to old age. Pop disagrees. His other leg doesn’t hurt and it’s the same age as the aching leg. I love hanging out with my family and friends. My shortcomings seem unimportant and meaningless when compared to the great defects of my family members and of my friends like you. I told Pop to calm down, take a deep breath and hold it for half an hour.”

“What did your father say to that?” I ask.

“Oh, he reminded me that I was a gifted child. He added that there was no way he and Ma would have ever paid anything for me.”

Scarlet tanagers were regular customers to my bird feeders this spring. Antonin Dvorák included a reference to this tanager in a musical piece he wrote while in Spillville, Iowa. I think the bird’s singing annoyed Dvorak. This black-winged red bird is stunningly handsome.

A masked skulker, showing a buttery-yellow color, moved about the underbrush at the edges of my yard. The black-masked, tiny bird called “witchity-witchity” or “follow-me, follow-me.” It was a common yellowthroat, a warbler that could never be too common for my liking.

A fellow could develop eyestrain from trying not to look at birds.

Large drops of rain turned the metal roof of the shed into a percussion instrument. On a cloudy day, the birds acted as sunshine.

I was working near a large facility that had installed a device that played the loud sounds of distressed starlings and the calls of Cooper’s hawks. The hawks are predators of starlings. This was being done to discourage starlings from nesting there and making a mess. As I listened to the odd music, seemingly unconcerned starlings flew all about the structure. They had figured out that no hawk is no hawk, even if it is calling

One day, a red-tailed hawk followed me as I drove a tractor pulling an implement that carved into the soil. It had a red tail. Not the tractor, the hawk. Not all red-tailed hawks have red tails and a young hawk doesn’t get a red tail until its second year. The hawk trailed me because I kicked up voles and mice for its benefit. I watched as the hawk caught and ate three rodents – three bland mice.

A squirrel ran across the street in front of my car. I was driving slowly, but I reduced my speed. I didn’t want to hit the squirrel. Crows in a nearby tree screamed “Hit it!” in the hopes of having squirrel for lunch. Carrion is a small part of a crow’s diet. I’ve learned from experience that crows enjoy pet foods.

Alice Lee of Albert Lea asked how to keep starlings from nesting in vents. Starlings will use any hole they can get into if it leads to a suitable-sized cavity for nesting purposes. Dryer, stove and bathroom vents are ideal. Vents with nests inside may not function properly. It’s best to keep starlings out before they start to build their nest. As starlings aren’t protected birds, it’s permissible to remove their nests. If possible, seal any openings by the use of hardware cloth or commercial vent covers. Any vent covering you use should be checked periodically to make sure the vent is working properly and is not impeded by a build-up of material.

“When do cicadas start singing in Minnesota?” The dog-day cicada calls from early July into September, the hottest part of summer, known as the dog days. This cicada has a high-pitched, whining song that can last a minute and resembles the sound of a distant saw. The male usually sings around midday and again in late afternoon. There are several other species of cicadas found in lesser numbers in the state, but we don’t have periodic cicadas in Minnesota. These are the cicadas that are famous (or infamous) for emerging in huge swarms in the central and eastern United States. Periodic cicadas live 13 or 17 years (depending on the species) underground. Some people call cicadas locusts, but they aren’t. Locusts are a kind of grasshopper.

“Are eastern towhees supposed to be here?” It’s OK with me. Eastern towhees summer in much of Minnesota. Once called the rufous-sided towhee, it can be seen scratching with a characteristic two-footed backward hop in leaf litter. Its name comes from the bird’s call note. A group of towhees is known as a tangle or a teapot.

“What can I do for an injured bird?” If it is a raptor or a vulture, contact the Raptor Center located at the University of Minnesota in St. Paul at 612-624-4745. For any other injured or orphaned birds and mammals, call the Wildlife Rehabilitation Center in Roseville at 651-486-9453. Thanks for caring.

“Walk with the dreamers, the believers, the courageous, the cheerful, the planners, the doers, the successful people with their heads in the clouds and their feet on the ground. Let their spirit ignite a fire within you to leave this world better than you found it.” — Wilferd Peterson

“Look underfoot. You are always nearer to the true sources of your power than you think. The lure of the distant and the difficult is deceptive. The great opportunity is where you are. Don’t despise your own place and hour. Every place is the center of the world.” ― John Burroughs