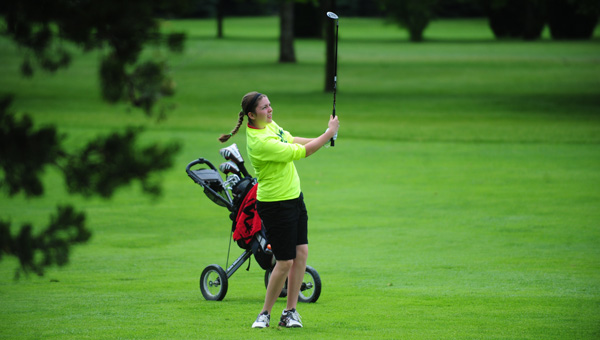 Claire Christian of United South Central sets up her ball on the green with a shot from the fairway on the first hole of the front nine at the Class A girls’ golf tournament Wednesday at Pebble Creek. Christian tied for 16th place. — Micah Bader/Albert Lea Tribune

BECKER — The United South Central boys’ and girls’ golf teams both took fourth place out of eight teams Wednesday on Day 2 of the Class A state golf tournament at Pebble Creek Golf Course. 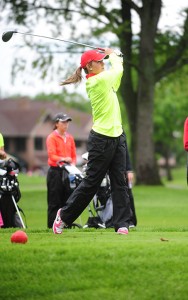 Kyley Bullerman of United South Central tees off on the first hole of the front nine at the Class AAA state tournament. — Micah Bader/Albert Lea Tribune

The boys’ team finished with a score of 677, one stroke away from Legacy Christian Academy in third place and six strokes behind Murray County Central in second.

“We shot better and moved up one spot in the standings,” USC head coach Brad Huse said.

The Pederson cousins, Ryan and Nate led the boys’ team by finishing in the top 10.

After the first round, Ryan, a freshman, held 15th place with a 40 on the front and back nine. In the second round, he added a 37 on the front, and another 40 on the back for a total of 157. That score gave Ryan the fifth best score in the 88-player field.

Nate, a sophomore, moved from 31st place after the first round to 10th place after round two. He followed his first-round scores of 44 and 40 with a 37 and 39. 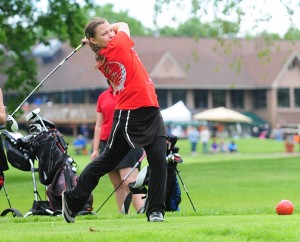 The girls’ team finished with a score of 785, two strokes behind Wabasha-Kellogg in third place.

Ali Wood and Claire Christian led the girls’ team with a pair of top 20 finishes.

“Our No. 1 and No. 2 girls shot very well,” Huse said. “Veronica Schindler also had a nice second day. She improved a lot.”

Next year, the Rebels hope to get back to state.

“The goal is to get back there, but everything needs to fall in place for us,” Huse said.