Remembering the tunes of the Korn Kobs 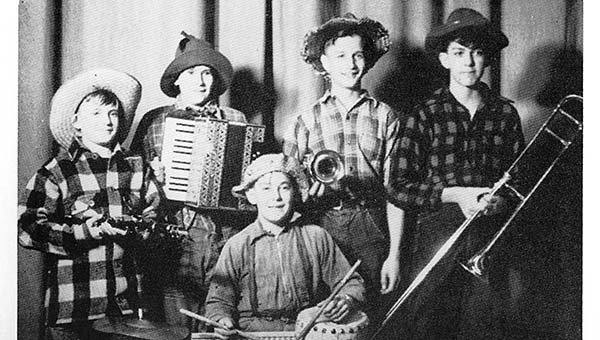 Albert Lean Rollie Green was pleasantly surprised to see a reminder of his past in a recent issue of Reminisce Magazine.

Green, along with some of his pals, made up the Korn Kobs, an old-time band that started in 1946. Former member Roger Naylor, of Mesa, Ariz., wrote the article and submitted the photo for the magazine.

Green was also happy to hear some Korn Kobs tunes on Party Line during the week after the story came out. And while the Korn Kobs might not be so well known now, they were quite popular in 1947 even throughout the state. 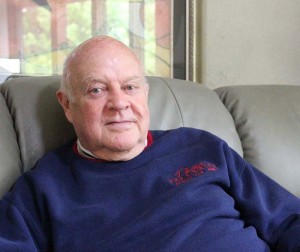 Rollie Green is a retired postal worker living in Albert Lea. He fondly remembers his time as a clarinet player with the Korn Kobs group in the late 1940s. –Kelli Lageson/Albert Lea Tribune

Green remembers the group forming while they were in eighth grade. It was made up of Green on clarinet, John Sturtz on alto sax, Darrell Meuser on accordion, Bill Kuchera on cornet, Roger Naylor on trombone, Eslie Bergstrom on washboard and drum, and later member LeRoy Van Proosdy on sousaphone.

“We all had a passion for music,” Green said. “It led to a lot of great experiences.”

The group started to perform at Tigers Roar, which was then only in its second year at Albert Lea High School. Green gives a lot of credit to teacher Marjorie Hanson for inspiring the group and also to legendary band teacher LJ “Cap” Emmons, for whom the auditorium at the old high school on Clark Street was named.

After playing for Tigers Roar the group received requests from clubs, church groups and PTAs to play at meetings and events. They couldn’t get paid or work at dances because at that time bands had to be unionized, Green said. Often they got a meal at the events, and they weren’t too worried about getting compensated because it was a honor to play at various places.

“We played too many places to remember,” Green said.

Some include Albert Lea High School and high schools in Freeborn, Kiester and Austin. Green also remembers playing at the Spanish dining room at Hotel Albert. Parades were another part of their schedule, and they would sit in the back of a truck to play.

“One thing would lead to another,” Green said.

They played mostly old-time polkas, waltzes and schottisches. Green said there was no rock ’n’ roll at that time, but they enjoyed the tunes they played.

“We were just a bunch of guys who liked music,” Green said.

Then came their big break winning second place in the “Stairway to Stardom” talent contest held by WCCO in Minneapolis in 1948. That led them to playing for veterans at the Veterans Affairs hospital, performing with Miss American 1948, Joan Caulfield, Sid Caesar and others. Arguably their biggest show was with Arthur Godfrey in front of more than 15,000 people. Green remembers the host asking the Korn Kobs the population of Albert Lea and telling them that the crowd they were playing for was basically the same size.

The Korn Kobs lasted until 1948, when each member went their own way. Two of the members made music their careers, and both Green and Mueser went on to play for the Air Force band after they joined the service.

Playing in front of famous people helped Green later in his life as part of the Air Force band. With them he played for President Dwight Eisenhower, John Wayne, Jimmy Stewart and John Foster Dulles on separate occasions. Playing in the Air Force band also helped him meet his wife in Maine, where she was living.

“Minnesota’s a lot like Maine so she enjoys it here,” Green said.

They made their home in Albert Lea. Green is retired after working 39 years as a postal carrier.