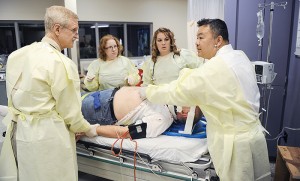 AUSTIN — As paramedics drove in a male patient with a gunshot wound, the doctors, surgeons, nurses and instructors who would attend to him prepared for work. They were concerned with the patient, but just as important were the dozens of people sitting inside classrooms, ready to watch them go to work. The patient may not have been real and the registered nurse may have been a surgeon in reality, but the simulation experience was valuable for the medical staff gathered at Riverland Community College’s Austin campus. 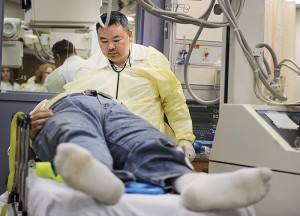 Joseph Buhain, an instructor at St. Paul College and medical recruiter for the Navy, talks to the pretend victim John Manigold during a simulation for a gunshot at Riverland Community College during the Minnesota Simulation Conference.

Almost 100 instructors, nurses, doctors, and medical staff from all over the U.S. gathered at Riverland Friday at the Minnesota Simulation Conference to learn more classroom simulations and how to incorporate them into their organization.

“We’re trying to be a catalyst in the state and in the region to bring the simulation community together,” said Amy Wangen, training and development representative at Riverland.

“We’re trying to prepare the students for what they’re going to actually see and experience out there,” he said. 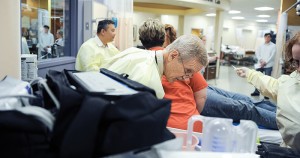 Dr. Mark Jensen, a surgeon at the VA Hospital in Fargo, N.D., plays the part of an RN during a simulation for a gunshot at Riverland Community College during the Minnesota Simulation Conference at RCC Friday.

Medical instructors and professionals traded simulation advice at the day-long conference Friday, which culminated in a simulation for some of the attendees present with the rest of the conference watching in classrooms. Wangen said she hoped all participants would be able to take something back to their hospital, medical center or school to improve their simulations.

“The ultimate goal of all this is better patient outcome,” Wangen said.