Funeral services for Robert H. Phillips of Ellendale will be at 10:30 a.m. Monday at St. Marys Catholic Church in Newry Township. The Rev. Swamy will officiate. Visitation will be from 4 to 7 p.m. Sunday at Bonnerup Funeral Service in Albert Lea and one hour prior to the service at the church. Interment will be in St. Marys Cemetery. 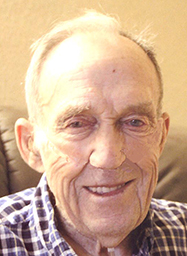 Robert was born Aug. 29, 1925, in Waterloo, Iowa, the son of Mathew and Angeline (Hubert) Phillips. He attended public school in Freeborn. On Jan. 20, 1946, he was united in marriage to Beverly Fredrickson at St. Theodore Catholic Church in Albert Lea. Robert worked for two years at the Wilson & Co. and farmed his own family farm for more than 60 years. He was a member of St. Mary’s Catholic Church, the Elks Club and served on the Geneva Township board (several years as chairman) for 34 years.

Robert was a huge Minnesota Twins fan, loved to play poker, card games and trips to the casino. He enjoyed long rides to check out the crops every year.

Memorials can be made to St. Marys Cemetery Memorial Fund.