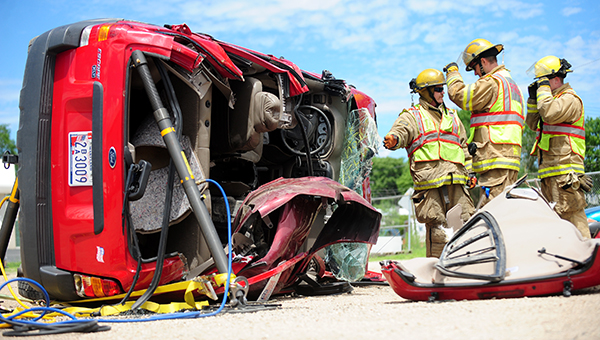 A bright, sunny day was just what the doctor, or in this case, firefighter, ordered for a special training on Thursday.

Capt. Mark Light of the Albert Lea Fire Department led an extrication training for the blue shift, which is made up of him, Trevor DeRaad, Jordan DeVries and Kurt Wallace. Allen’s Tow ’N Travel had saved the Fire Department a smashed up Ford Escape to practice on. 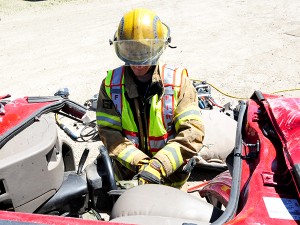 Albert Lea firefighter Kurt Wallace cuts off a portion of a steering wheel of a Ford Escape Thursday during a training exercise. — Brandi Hagen/Albert Lea Tribune

“They supported us for years doing this,” Light said.

The firefighters have many duties, including fighting fires and extricating people from vehicles after crashes, so training is important.

“It’s a team effort; no one can do this themselves,” Light said.

Even during training, Light said his goal is always to make sure all his fellow firefighters are safe.

Then the extrication began. The Ford Escape had four doors and three main support columns. To add a little drama and make it seem more real, Light made up a scenario for the other firefighters. He told them a driver was pinned and that there was a baby in a car seat in the backseat. He told them the “baby” was definitely alive because it was crying.

“I gave them the worst-case scenario,” Light said.

In reality, Light said the firefighters would take a minute or two to get to anyone who is trapped. Because this was a training, they were taking their time trying different techniques.

“This is the time to ask questions or try things that may seem silly,” Light said. “You gotta know what you can do and what you can’t do.”

Light said he has even seen more experienced firefighters let newer members do something wrong so that way they can see what the result was and why they shouldn’t do that in a real scenario.

“For the younger guys if you’re gonna screw something up, this is the time to do it,” Light said.

One of the first steps when arriving on a scene is to look at all possible hazards. Then, stabilizing the vehicle is crucial so it stays steady while the firefighters work to rescue anyone inside.

At this training, the vehicle had roof damage and the passenger side laid on the ground. The firefighters installed two large metal supports on both the top and bottom of the vehicle because it was already swaying. Since they didn’t want it to roll over onto its roof, the supports helped to keep it in place. And Light said as soon as the roof was cut off, the vehicle would become even less stable.

A quick strike of the hammer broke all the windows that weren’t yet missing. Then firefighters set up the hydraulic pump that powers both large, metal shears and the jaws of life. The hydraulic pump has 10,000 psi oil pressure.

That kind of equipment isn’t cheap, but Light said more and more rural fire departments have fundraised to be able to get it. He said he has seen less and less calls outside of Albert Lea and knows that fire departments in Glenville, Alden, Freeborn, Clarks Grove and Geneva all have the jaws of life equipment.

“The shears will cut just about anything,” Light said.

Then at Thursday’s training the firefighters used the shears to snip the three support columns on the driver’s side. Light said he hoped they could bend the roof back like the lid of a tin can, but sometimes it doesn’t work when there’s a lot of damage to the roof. Light said he’s continually surprised by how tough the materials are in newer cars.

“It’s absolutely amazing what they’ll withstand,” Light said. “With these newer vehicles you basically sacrifice the car to save the people.”

During extrication, Light said a certain sense of comforting comes out in the firefighters. Medics at the scene also do this, but Light said the firefighters try to warn those in the vehicle that the machines they use make a lot of noise.

“You tend to get focused on what you’re doing, but you always know there’s a person in there,” Light said. “We tell them, ‘It’s gonna get loud.’”

In a few minutes the roof was completely off the vehicle, and the made-up people who were trapped would have been safe. Light encouraged the firefighters to keep taking apart the vehicle and imagine other scenarios. They used a circular saw to take a large piece out of the hood while pretending there was an engine fire they needed to extinguish.

Keeping an eye out for airbags is also important, Light said. If the airbags haven’t deployed in a crash they can become a hazard if the firefighter hits a sensor while trying to rescue someone. Light said they typically cut the battery wires and wait two minutes, after which the airbags are out of commission.

“But you always assume they could go off,” Light said.

Light said he has seen crashes where passengers were wearing their seat belt and the airbags deployed and said it’s always amazing when people walk away from a bad crash. He said firefighters also enjoy seeing the people they rescued are safe.

“It’s a pretty good feeling when they’re on their way to the hospital after you’d come up and seen the state the vehicle was in,” Light said.