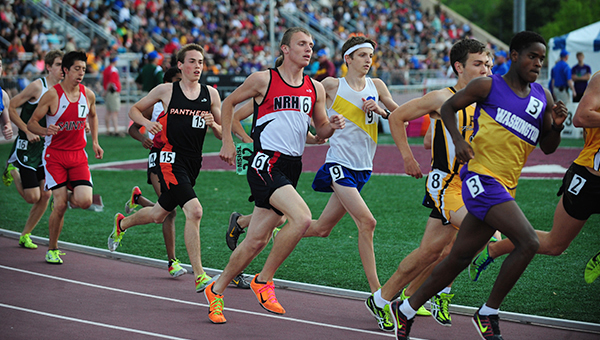 ST. PAUL — The Class A boys’ 3,200-meter run Friday at the state track meet was full of surprises.

The winner of the event was Charlie Lawrence of Foley. He cut off more than 40 seconds from his seeding time, as did the sixth-place finisher, Isaac Overmyer of Park Rapids Area.

Schiltz had unfinished business after his performance at state last year, he said. In 2012, he entered the state meet with the eighth-best seed time, and finished in 14th place.

“I went from running the fastest time I ever ran (sections) to the season’s slowest (state),” he said. “It was a huge disappointment for me.”

However, this year’s 3,200-meter run at state, Schiltz was pleased with his third school record-breaking performance of the season.

“I’m very happy with with this competition,” he said. “It was getting my own revenge trying to get a medal here.”

After some of this season’s meets were canceled due to weather, Schiltz said he had to work hard at the remaining meets to prepare for state.

“Our goal with the few meets we had left was to push myself and try to P.R. (earn a personal record time) to try to simulate the competition like this,” he said.

Schiltz was pitted against a familiar competitor at the state meet. He faced Johnathan Surber of St. James Area earlier during the season at the true-team and Section 2A meets.

At sections, Surber caught him on the last lap.

“It made me practice my 200-meter sprint at the end, which I hadn’t had a chance to do all year,” Schiltz said.

At state it paid off. Surber crossed the finish line 1.67 seconds after Schiltz to take ninth place.

The Monday edition of the Tribune will feature coverage from Day 2 of the state track and field meet. Results from Schiltz’ second event, the 1,600-meter run, will be published Monday.