Zoning ordinances do a good job of clustering similar uses of structures. Single-family homes in one neighborhood. Businesses in another. Industrial factories in yet another. Everyone pretty much agrees on that.

However, the down side of zoning ordinances is that they can become the dreams and wishes of the government workers who draft them, rather than making real-world sense. Overly zealous ordinances can chase away developers before they approach city leaders about developing. 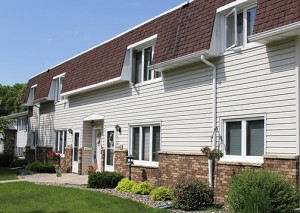 A structure like this one on Lakewood Drive west of Green Lea Golf Course would not be allowed west of downtown because it uses brick-accented siding.

Such is the case with a zoning measure presently moving through city channels regarding the blocks to the west of downtown and east of the abandoned railroad corridor.

That’s well and good, but the design standards are too stringent and place constraints on owners of the single-family homes already in the area.

As an example, the zoning restricts the use of steel siding.

We understand the city not desiring what looks like a pole barn for a professional office or an apartment complex. But there are designs for brick-accented steel siding that look quite nice, cost less and require less maintenance than all brick or stucco. Great examples can be found with homes on the western shore of Edgewater Bay, duplexes near Green Lea Golf Course or businesses on the north end.

What’s silly is that if a developer wanted to build an apartment complex in the west-of-downtown neighborhood but only if his firm could use normal brick-accented siding, like in the photo, the city leaders no doubt would allow it anyway through a conditional-use permit. That costs staff time. So why curtail steel or aluminum siding so much anyway?

There are other flaws in the ordinance: No outdoor seating. No drive-thrus. If the side of a building faces a street it must meet window standards like a front. The single-family homes become nonconforming. Families cannot expand their houses without council permission. A person or developer could not even build a brand new house. These are a few examples of overreaching in this ordinance. There’s more, but we are limited for space.

Many developers inspect regulations prior to even calling city officials about their intentions. How many developers will not bother to jump through so many hoops? What it probably will do is spur developers to build on the edge of the city where regulations are less stringent.

And there is talk at City Hall about the city subsidizing developers to help them meet the standards. The city budget already is cash-strapped. It no doubt would be fiscally imprudent to subsidize private construction with public dollars. That’s metro-style talk. It won’t go over well with Albert Leans.

This ordinance already has had a first reading. It likely will get approved because a retired city official and a consultant worked so very hard on this. But because a government-paid person worked hard doesn’t mean that elected officials should set aside the interests of their constituents and not act as the voice of the people their roles require. The Albert Lea Planning Commission should have waved a red flag, not a rubber stamp.

As it stands, the Albert Lea City Council is the only entity that can prevent the measure from becoming city law. We call on councilors to stop the train now and send this back to the Planning Commission for further review. The intent is laudable, but the design standards need to be realistic.