Shooting for sport and fun is a tradition in America 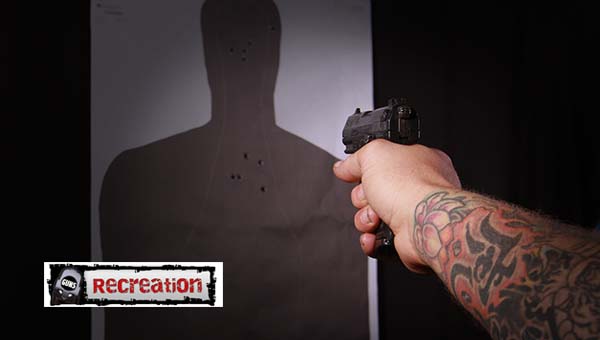 Target shooting is among the many ways of guns are used for recreation. Shooting sports rarely stir controversy in the national media, but they are a common part of American culture. –Brandi Hagen/Albert Lea Tribune

Editor’s note: This is the fifth in a six-part series on guns.
Schools and shotguns.

Not a common theme, but since 2001 a sport that doesn’t include a ball or a puck has been growing in participation among high school students. That sport is the Minnesota State High School Clay Target League.

This sport uses machines that hurl orange clay discs through the air called clay pigeons. Participants fire shotguns at the targets, like shooting a bird. There are three common ways to shoot at clay pigeons: trap, skeet and sport, but the league shoots only trap.

Recreational use of guns is a common American pastime. Hunting, target shooting and clay pigeon shooting are examples of how the U.S. culture welcomes gun sports, often shared between parents and their children.

The clay target league was started in Plymouth in 2001 by Jim Sable, a firearm instructor for more than 48 years and an avid hunter and sportsman. He wanted to get young people involved in the recreational use of guns and gun clubs. 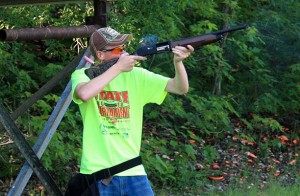 Tyler Koenen, a participant in the Minnesota Clay Target League, shoots at clay pigeons on June 13 at Oak Grove Gun Club. Club members were there to give pointers.

“There’s interest in this, a positive interest, too,” said trap shooting coach Duane Koenen of Alden.

Duane is a technical education teacher in Glenville, Pam is the FFA adviser in Alden and Sorum is an agriculture instructor in New Richland. All three of the trap shooting coaches started the program at their schools because of the opportunity it offers students, especially those who aren’t interested in ball sports.

“It gives them a chance to compete, a chance to be a school representative at competitions,” Sorum said. “I get so many thank-yous from parents because if it wasn’t for this sport, many of the kids would not have an activity.”

Duane added that he and his wife had a push to get the program started in their respective schools because their own children were interested in the sport and wanted to take part in the experience.

“The reason I got my kids going in trap shooting is because when they’re younger you go out hunting with them and you walk for three miles and you see two hen pheasants and they don’t get to shoot,” Duane said. “Kids that age want to shoot a gun. So we started going to the trap range.”

Unlike other competitive high school events, trap shooting meets are virtual and take place at outdoor gun clubs, not on school property, where firearms are banned under state law. A virtual meet means that teams don’t travel around the state for regular meets. Instead, they shoot at their home gun clubs and the coaches submit scores to the league. And, as an added safety measure and to follow school policies, the shotguns the students use are brought to meets by parents, stored at homes near the shooting ranges or, if a student is transporting one, he or she parks off campus so guns never enter school property.

The co-ed league keeps track of team, individual and overall statistics, but the thing it is most proud of and is arguably the most important is that there have been zero reported injuries or school gun policy violations since its inception in 2001.

“It’s important to point out, because it’s very common to get the question about guns in school,” Sorum said.

League rules state that there must be a range safety officer and at least one coach for every 10 students at meets.

Duane said the environment of trap shoot meets and practices are so well controlled that safety is never really an issue. Students, coaches and gun club members are all keeping an eye on each other making sure that safe practices are being used in the presence and handling of firearms.

“If you asked me if I felt safer out in the woods during hunting season or at a trap shoot with 700 kids, I would feel safer with the kids any time,” Sorum said.

It’s because the students know it’s serious business to have a gun in their hands, Duane said.

People who haven’t had a safety class or aren’t on a shooting league are the ones that concern Duane.

“I think a lot of the problem with guns nowadays is that kids don’t have the exposure to them,” Duane said. “The first thing a kid is going to do when no adults are around is pick it up, look at it, play with it, and that’s when an accident happens. Whereas if they are exposed to it and grow up with that with parents around, let them handle it, let them shoot it and say this is fine but you can only do this when I am here, it takes away that curiosity.”

Students and the younger generations aren’t the only ones curious about guns, especially lately. As gun laws have become a hot topic in the state Legislature, Rich Finke, a member of the Albert Lea Pistol and Rifle Club and a certified instructor for the National Rifle Association, has seen increases in numbers in the classes he teaches.

Those classes — conceal and carry, basic training and advanced training — cover a variety of topics for pistols, rifles and shotguns.

According to Finke, a basic training class is for beginners who want to learn how to operate a firearm. The advanced training class takes an individual who is comfortable with firearms and teaches them to shoot more accurately, faster and at greater distances.

The conceal and carry class deals with specific state laws about handguns used for defense. Anyone seeking a permit to carry a firearm in public must provide to their sheriff a certificate showing they have completed this class.

He added that he has seen in many instances a husband will get involved recreationally with guns and a wife will follow suit so the two have a shared hobby. And when their children are old enough, they get involved, too.

Finke said the increase in the conceal and carry classes has been influenced by recent legislation.

“People are doing it for both a sense of security, but also because they want to do it while they can before the possibility of it being taken away,” Finke said.

What comes after training?

Finke said once a person knows how to properly handle a firearm there are many different ways to use it recreationally.

Some of those ways include hunting, skeet shooting, trap shooting, sport shooting, long range shooting, running deer shoots and target practice. If shooters wish to take their hobby a step further, there are regional and national competitions.

Trap, skeet and sport shooting are all variations of shooting at clay pigeons.

While some people shoot clay pigeons for entertainment or competition, others, like Kenny Hanson, shoot them for practice for bird hunting.

Hanson grew up with hunting and fishing as pastimes. As a member at Oak Grove Gun Club, he enjoys shooting skeet and sees it as a challenge.

“I like to see how many I can break in a round and try to improve myself,” Hanson said. “Then I hope that it carries over to hunting and that I’ll make a good shot.”

Duane said the same was true with his children in regard to trap shooting.

“It helped them tremendously,” Duane said. “Now if a bird gets up within range they know it. If it’s out of range, they don’t bother to shoot. It makes them better hunters just by knowing the capability of the firearm.”

And, like any other sport, Hanson said it’s enjoyable to do with others and it’s not always about being the best.

“A lot of the times when I’m out hunting, it’s just about being in the outdoors and seeing things — enjoying the wildlife and watching my dog work,” Hanson said. “If I don’t see anything, so be it. If I miss a bird, so be it.”

Besides enjoying the outdoors and the wildlife, many hunters find they get into the sport of hunting because of tradition.

“Back in my grandparents’ era it’s what you did,” said Greg Posthumus, a Pheasants Forever committee member.

Because of the traditional value, one of the focal points of Pheasants Forever is promoting youth involvement.

“People are busier and busier,” Posthumus said. “Kids aren’t hunting like they used to. We want to get them outdoors and get them active.”

Posthumus and his brother started carrying BB guns when they were about 7 or 8 years old and started hunting with shotguns at about 12 because their dad was a hunter.

“A lot of kids have hunted for years, and it’s what they do with their grandpas and their dads. Pheasants Forever wants to keep that going,”

The way organizations like Pheasants Forever, Ducks Unlimited and the Minnesota Deer Hunters Association keep those traditions alive is by promoting land purchases for habitat and turning them over to the Minnesota Department of Natural Resources for public hunting grounds.

“Everybody is kind of on the same terms,” Posthumus said. “We all have the same goal.”

There are other recreational ways that people use guns, too, that don’t require shooting of any kind, like collecting guns or attending gun shows.

“A lot of your older guns are keepsakes. You probably won’t shoot them, but each year they become more and more valuable,” Finke said.

For now, both Finke and Hanson expressed no concern about the recreational use of guns being impacted by the debate in the Legislature.

“When it comes to what has happened in the past with guns, we feel bad like everyone else,” Hanson said. “But the laws aren’t dealing with us per se.”

• An average hunter spends $1,638 every year on the sport

• Hunters and shooters have paid more than $5 billion in excise taxes since 1939.