Softball co-Players of the Year 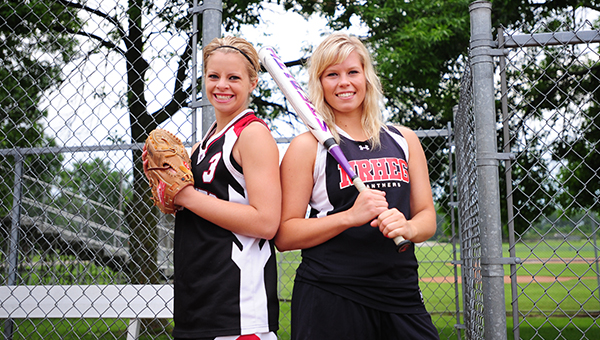 Allison Songstad, left, of Alden-Conger and Tara Simon of New Richland-Hartland-Ellendale-Geneva completed exceptional seasons on the softball diamond. Songstad and Simon are the Tribune’s 2013 softball co-Players of the Year. — Micah Bader/Albert Lea Tribune

Allison Songstad has been a mainstay in Alden-Conger’s pitching rotation. In fact, Songstad was the rotation.

“She has thrown every inning of every game for the last three years,” Alden-Conger head coach Gary Nelson said. “She’s one of the most durable pitchers I’ve ever coached.”

“Gary took me under his wing my freshman year, and I’ve been pitching ever since,” Songstad said. “He gave me the confidence I have when I’m on the mound, and he taught me everything I need to be successful and to be a leader on the team.”

Songstad led the Knights to a 9-4 overall record this season by striking out 76 batters and walking only nine.

“The last few years, I’ve been working a lot in the offseason lifting weights and going to a lot of pitching and slapping camps,” she said.

When a foot of snow fell late this spring, Songstad improvised with her training.

“I couldn’t pitch outside, so I made a mound up in the hayloft of our barn,” she said. “Any time I could find a catcher, I was out there pitching for this year, because I was really excited for it.”

Nelson worked on a variety of pitches with Songstad: the fastball, riseball, dropball and change-up. He said she always stayed enthusiastic about the sport.

Along with her coaches, Songstad credits her family for her success on the field.

“I’m thankful for the constant support my parents have given,” she said.

In addition to pitching, Songstad earned a batting average of .363.

Next year, she will attend Bethany Lutheran College in Mankato where she will play softball.

Tara Simon had a break-out season at the plate for the New Richland-Hartland-Ellendale-Geneva softball team. She was the only player in the area to bat over .500 (.535) and have an on-base percentage over .600 (.612).

NRHEG head coach Wendy Schultz said Simon — one of two seniors on the team — was a big part of the Panther’s successful 9-5 season this year.

“Tara’s a quiet leader; she leads through her actions,” she said. “Half of our team could almost be on the B squad.”

In addition to having a young squad, the Panthers had to overcome injuries entering the season, but the rest of the team stepped up, Simon said.

Simon has excelled offensively, and she has been a team player on defense, Schultz said.

“I’ve moved her around to a bunch of different positions. She was our catcher, because she has one of the best arms on our team,” she said. “Then, she went over to third base, even though her favorite position is center field.

“She always listened and was respectful.”

Schultz has coached Simon since she was in eighth grade and has been able to see her progress through the years.

“Fundamentally, she’s always been sound,” Schultz said. “She also plays in the offseason, so she gets a lot of cuts and swings.”

Next year, Simon will attend Iowa State University and she will not play softball so she can focus on her studies in pre-veterinary medicine.