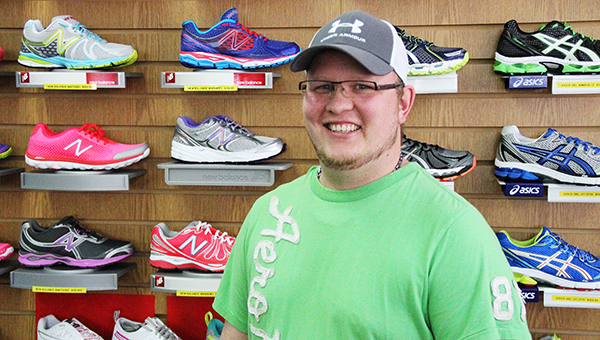 He’s the cherubic-faced kid at the counter of Tiger City Sports. Only he’s not a kid anymore.

Jordan Flatness is a 30-year-old husband and father to two boys.

He has been working at Tiger City Sports since he was 15 and takes pride in knowing about shoes, baseball gloves and other sporting goods available at the store.

Flatness has worked at the store for 15 years, except for two short stints. He pursued a career as a counselor to troubled youth at the Gerard Academy in Austin and tried his hand at being a security guard at Diamond Jo Casino. Both times he came back to what he loved — retail sales at the sports goods store.

These days, he doesn’t look for work elsewhere. 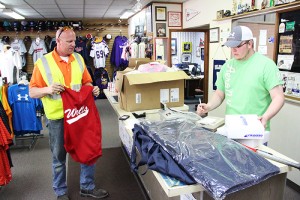 “My long-term goal is to own Tiger City Sports,” he said.

And he enjoys working for owner Gary Hillman.

“Gary is like a mentor to me in how I want to proceed in my career,” Flatness said.

Hillman, likewise, enjoys having Flatness as an employee and is glad he has stuck around.

“Over the years, he has developed into being my right-hand man,” Hillman said.

Flatness runs the store when Hillman is gone. He orders the shoes and clothing and knows better than Hillman what young customers are looking for. Passing ownership when he retires, he said, is a possibility.

Flatness graduated from Albert Lea High School in 2001. While working at the store he got a degree in law enforcement from Riverland Community College in 2006. During a six-month internship, he found that wasn’t the career for him, either.

“I wanted to deal with the positive side of people, rather than negative,” he said.

For a guy who works in a sporting goods store, Flatness has been limited when it comes to playing sports. His favorite sport is hockey, and he played it right through the bantam level and was all set to play varsity. He had a seizure when he was 14, and doctors removed a tumor from his brain when he was 15. The doctors said he couldn’t play contact sports anymore.

He still enjoys watching hockey, and Flatness can be found occasionally hitting a little white ball on golf courses when he isn’t spending time with his family. In fact, at home with family is where he is most of the time when he isn’t at work, he said.

But his sports heart is in his products. He likes to read about the latest garments from Under Armour or the latest shoes from New Balance. He is ready should someone need to fit a baseball glove, understand the difference between the types of running shoes or desire to find the right hockey stick.

“Customer service. That’s what we thrive in,” Flatness said.

He said many competing sports goods stores in town or over the Internet do not deliver the same level of customer service that Tiger City Sports does. They have clerks that often lack experience with the goods. He and trophy manager Tom Jones on Monday carried boxes to a car for a customer from out-of-town.

“Do other sports stores carry your stuff to your car when you need it?” Jones asked.

He said the store does special orders, such as embroidering a name on a gym bag or helping a customer get a special shoe. And the store is making an emphasis to have goods people cannot get as easily over the Internet.

Flatness is the son of Margaret and the late Wayne Flatness of Albert Lea. He has two sisters, Valerie Taylor of Emmons and Brianne Arndt of Rochester, both married. His wife is Patricia. They have two sons, Riley, 3, and Parker, 4 months.