Stepping up when it counts 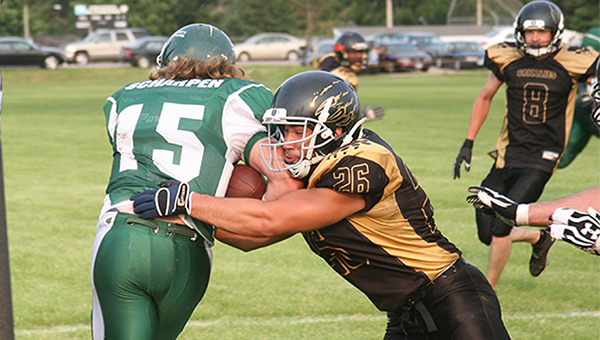 Colton Zuniga of the Albert Lea makes one of his four tackles Saturday in a 16-14 win over Steele County. — Melissa Schmidt/For the Albert Lea Tribune

The Albert Lea Grizzlies football team earned the No. 2 seed in the Southern Plains Football League playoffs Saturday with a 16-14 overtime win over the Steele County Warriors at Blooming Prairie.

After starting the season with a pair of road losses, the Grizzlies have reeled off five straight wins, the longest winning streak in the SPFL. In the nine-man football rankings, which also includes teams from the National Nineman Football League, Albert Lea is No. 3. 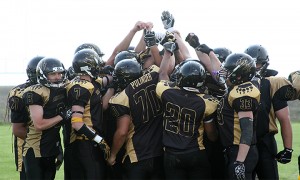 The Albert Lea Grizzlies celebrate a playoff berth and a No. 2 seed Saturday after an overtime win over Steele County. — Melissa Schmidt/For the Albert Lea Tribune

In the first round of the playoffs, the Grizzlies will take on the Warriors in a rematch. Despite Steele County’s 1-6 record and No. 7 seed, the Warriors are a formidable opponent. Steele County lost its six games by a total of 18 points, and the Warriors haven’t been defeated by more than a touchdown.

“They’re a lot tougher than they sound with that record,” Albert Lea offensive lineman Craig Schmidt said. “This game isn’t going to be another 60-to-nothing rout like we have had in previous weeks. Although, we’d take that too.”

In the postseason, the Grizzlies are guaranteed home field advantage, as long as they can keep their winning streak intact.

However, home-field advantage may prove to be overrated if Albert Lea supporters keep showing up to road games like they did Saturday.

“We had a huge following of fans who came to the game,” Schmidt said. “Our fans probably out-numbered theirs three-to-one.”

The first quarter was scoreless, and Steele County took an 8-0 lead with about three minutes left in the second quarter. Despite a 90-yard drive by Albert Lea in the waning moments of the first half, the Warriors led 8-0 at the half.

In the third quarter, the Grizzlies hit paydirt. Tony Tolbers broke the plane of the end zone on a four-yard run, and he connected with Jake McClaskey for the two-point conversion, Schmidt said.

Both defenses produced gridlock in the fourth quarter, and the game headed to overtime.

“The SPFL follows high school overtime rules,” Schmidt said. “Each team gets a chance to score with four downs at the 10-yard line.”

Albert Lea took possession of the ball first. After picking up five yards on first down, the Grizzlies gave back 15 yards on back-to-back negative plays. However, on fourth-and-22, the Grizzlies defied the odds.

“Tolbers connected with Spencer Niebuhr over the middle for a score, and Niebuhr put the icing on the cake by plowing up the middle for the two-point conversion,” Schmidt said.

The Warriors managed to score a rushing touchdown to make the score 16-14, and the Grizzlies defense took care of business on the two-point conversion to preserve the win.

“We gobbled him up on the two-yard line to end the game,” Schmidt said.

“It was awesome to see so much support from our fans. The crowd really got into it during our goal-line stands in the fourth quarter and overtime.”

The Grizzlies-Warriors playoff rematch will be at Albert Lea at 5 p.m. Saturday.