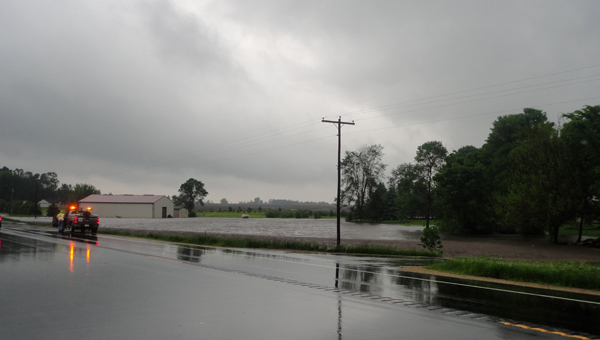 Flooding caused by Wednesday’s storm caused part US Highway 65 south of Interstate 35 to be limited to one lane of traffic. –Brandi Hagen/Albert Lea Tribune

WELLS — Hail and winds from a severe thunderstorm brought damage to Wells on Wednesday. Minnesota Highway 109 is closed between Alden and Wells. Many residents are without power. Click here for an updated story. 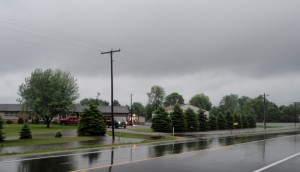 Water floods the ditches and around the home of the residents at 17304 US Highway 65 Wednesday after heavy rain hit the area. –Brandi Hagen/Albert Lea Tribune

Damage was still being assessed Wednesday night but most trees were removed from the streets, said Faribault County Sheriff Mike Gormley. Many trees and limbs litter the city.

He said there is some property damage from the hail and high winds.

He said the storm tore the roof off of a seed building. Minnesota Lake also suffered tree damage, he said.

Early reports say the hail in Wells was golf-ball-sized. The National Weather Service says people reported hail from Wells to east of Alden to north of Freeborn and places in between that triangle.

Alden residents were without power for about three hours after trees and power lines fell in the community, according to Freeborn County Sheriff’s Office Sgt. Tim Bennett.

Bennett said some roads were blocked in the county from fallen trees and water flowing over the roads. Freeborn County Highway Department crews have been working to clear the roads.

Lightning reportedly struck the gas line in a house at 23520 700th Ave., owned by Jim and DeDee O’Byrne, at 6:07 p.m. Wednesday, causing an unknown amount of damage, he said.

The lightning strike reportedly started a small fire that ruptured a water pipe, which ultimately put the fire out.

When authorities arrived there was smoke in the house. Bennett said he saw at least one blown light bulb in a garage next to the house.

Anytime Fitness owners Bill Bromeland and his wife, Shawn, were on their way home to Blue Earth on Interstate 90 when they said they made the decision to pull over to the side of the highway about three miles east of the Alden exit.

They said before they left the gym, some of the gym’s members had warned them to wait for the storm to pass, but they decided to go ahead and drive home.

“We kind of regretted it after we got onto the interstate,” Bromeland said. “We saw very very dark clouds.”

He described the conditions as “very, very windy” on the side of the road.

“It got worse after that,” Bromeland said. “I could feel the wind get some lift on the vehicle, and it felt very unstable.”

He said he began thinking about his family and his children.

“I don’t know if we were in as much danger as we thought but it sure felt that way,” he said.

Once they continued west on Interstate 90 about a half-mile west, Bromeland said they encountered a mobile home in the median that appeared to have blown over and detached from the pickup that was pulling it.

“Don’t make the mistake,” Bromeland said after seeing the trailer. “If you know there’s bad weather, don’t go out.”

No injuries were reported across the county, as of 9 p.m. Wednesday.

Other areas of the Tribune coverage area sustained high water, such as Main Street in Albert Lea. High water resulted in U.S. Highway 65 south of Interstate 35 to be down to a single lane.

Much of Worth County and places to the south along the Shell Rock River were in a flash flood warning Wednesday evening, issued by the National Weather Service. A tornado was spotted in Iowa near Latimer and Hampton near 4:30 p.m. 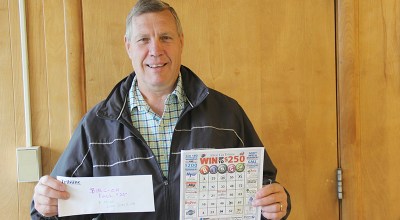