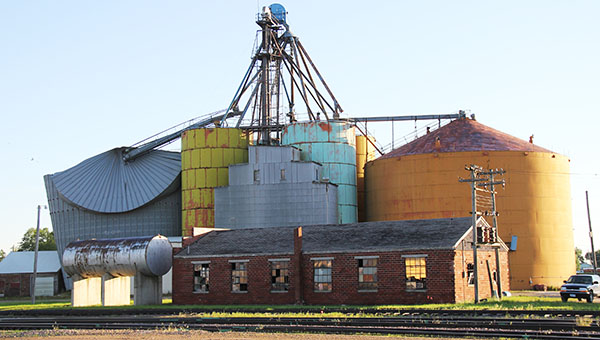 Strong winds Wednesday evening pushed and bent the roof of a grain bin at the Wells elevator out of its position. — Tim Engstrom/Albert Lea Tribune

Hail, strong winds cause damage through the area

WELLS — The powerful center of a severe thunderstorm struck Wells on Wednesday evening, delivering golf-ball-sized hail. The storm caused trees to topple, branches to break and power to go out. 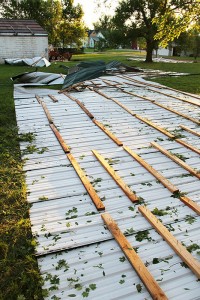 A severe thunderstorm that delivered strong winds and hail to Wells ripped the metal roof off of a building belonging to Pioneer seeds. — Tim Engstrom/Albert Lea Tribune

Strong winds pushed and bent the roof of a large bin at the Frank Bros. grain elevator off its circular walls. It appeared still connected to its auger, as if it kept the roof from crashing to the ground.

Residents in the Wells area this morning said the city received about 3 1/2 inches of rain during the storm. The storm arrived and power went out around 5 p.m., according to Wells Municipal Utility. When the water drained, the streets were littered with grass, leaves, sticks and some branches and trunks.

“It looked like you could mow the street,” said Carla Richards this morning at the Casey’s General Store.

She and her husband live six miles north of Wells, where hail struck their barn. They said they witnessed wind roll a small grain bin across a field. They described the hail as loud. They were still without power as of 6:15 a.m. Thursday.

Most of the residents in Wells had power come back on around 4:30 a.m., said Wells police officer Eric Neubauer.

Crews came from Fairmont and Blue Earth to help restore power, he said. He came on duty around 7 p.m. and worked overnight.

“It was eerie to work when it was pitch black,” he said. “There were no lights anywhere.” 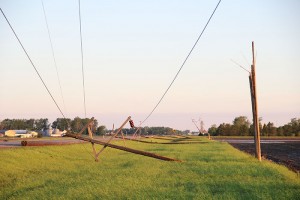 As far as he knows, there were no injuries as a result of the storm.

Many cars and buildings have dents from the hail, Neubauer said, including his squad car. A metal roof of a Pioneer seed building was blown off, and some homes lost shingles, he said.

Steve Prange was working in Albert Lea when the thunderstorm struck Wells. He arrived at home, 295 First Ave. SE in Wells, to find a tree down in his yard with its limbs on the roof.

Six power poles were down on Minnesota Highway 109 about a mile east of Wells, prompting the Minnesota Department of Transportation to close the route Wednesday evening. As of this morning, it remains closed. A sign in Alden urged travelers to take an alternative route to Wells.

Eight power poles were down along a gravel road north of Wells. 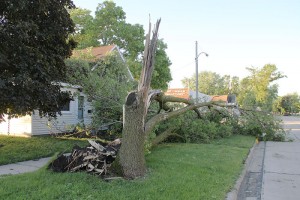 A tree fell in the yard of Steve Prange’s home at 295 First Ave. SE in Wells, with limbs landing on the roof and front wall. — Tim Engstrom/Albert Lea Tribune

Wells resident Reg Rebelein said streets were flooded because the water came so fast that it couldn’t drain.

Damage in Wells was still being assessed Wednesday night but most trees were removed from the streets so traffic could get through, said Faribault County Sheriff Mike Gormley.

The National Weather Service says people reported hail from Wells to east of Alden to north of Freeborn and places in between that triangle. The weather service said most hail was golf-ball-sized but some was as big as 2.75 inches wide. 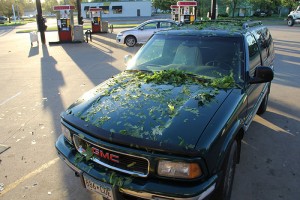 Leaves cover a GMC Jimmy belonging to Wells resident Tom Neubauer on Thursday morning. Many of the automobiles in Wells looked like this Wednesday evening after a severe thunderstorm nailed the Faribault County town. — Tim Engstrom/Albert Lea Tribune

Many residents of Alden reported hail and leaves littered that town’s streets Thursday morning, as well.

Alden residents were without power for about three hours after trees and power lines fell in the community, according to Freeborn County Sheriff’s Office Sgt. Tim Bennett.

Bennett said some roads were blocked in the county from fallen trees and water flowing over the roads. Freeborn County Highway Department crews have been working to clear the roads.

Lightning reportedly struck the gas line in a house at 23520 700th Ave., owned by Jim and DeDee O’Byrne, at 6:07 p.m. Wednesday, causing an unknown amount of damage, he said.

The lightning strike reportedly started a small fire that ruptured a water pipe, which ultimately put the fire out.

When authorities arrived there was smoke in the house. Bennett said he saw at least one blown light bulb in a garage next to the house. 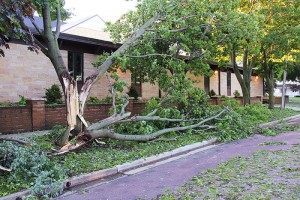 Part of a tree is down at Good Shepherd Lutheran Church in Wells on Thursday morning, while the other portions of the tree are threatening to fall. — Tim Engstrom/Albert Lea Tribune

Anytime Fitness owners Bill Bromeland and his wife, Shawn, were on their way home to Blue Earth on Interstate 90 when they said they made the decision to pull over to the side of the highway about three miles east of the Alden exit.

They said before they left the gym, some of the gym’s members had warned them to wait for the storm to pass, but they decided to go ahead and drive home.

“We kind of regretted it after we got onto the interstate,” Bromeland said. “We saw very very dark clouds.”

He described the conditions as “very, very windy” on the side of the road.

“It got worse after that,” Bromeland said. “I could feel the wind get some lift on the vehicle, and it felt very unstable.”

He said he began thinking about his family and his children. 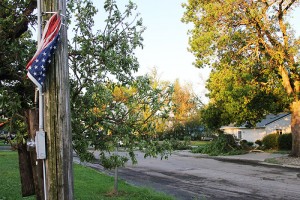 By wrapping around its bracket, an American flag remains flying Thursday morning along Minnesota Highway 109 after a storm hit Wells Wednesday evening. In the background, trees are down at Midwest Dental. — Tim Engstrom/Albert Lea Tribune

“I don’t know if we were in as much danger as we thought but it sure felt that way,” he said.

Once they continued west on Interstate 90 about a half-mile west, Bromeland said they encountered a fifth-wheel trailer in the median that appeared to have blown over and detached from the pickup that was pulling it.

“Don’t make the mistake,” Bromeland said after seeing the trailer. “If you know there’s bad weather, don’t go out.”

No injuries were reported across the county, as of 9 p.m. Wednesday.

Other areas of the Tribune coverage area sustained high water, such as Main Street in Albert Lea. Albert Lea received 0.77 inches of water, according to KIMT-TV. High water resulted in U.S. Highway 65 south of Interstate 35 to be down to a single lane.

Much of Worth County and places to the south along the Shell Rock River were in a flash flood warning Wednesday evening, issued by the National Weather Service. A tornado was spotted in Iowa near Belmond, Latimer and Hampton near 4:30 p.m.