Thriving when the game is on the line 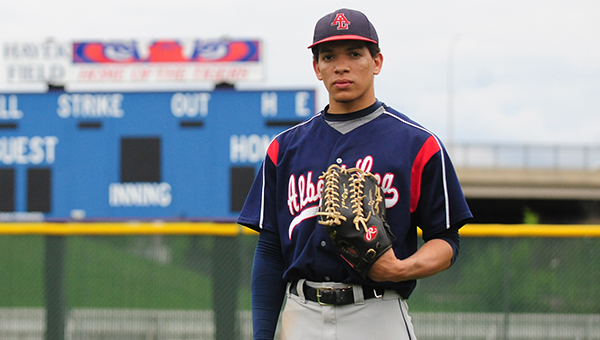 Makael Lunning followed a phenomenal junior season where he tied the single-game state record for grand slams with an even more productive season at the plate as a senior.

For the second year in a row, Lunning is the Tribune’s baseball Player of the Year.

“You liked to have the bat in his hands with the game on the line,” said Albert Lea head coach Joe Sczublewski. “Whenever he came up to bat, you never knew what would happen.”

Lunning improved his batting average to .423 from .384 last year. He also scored three more runs than last year, even with 13 fewer at-bats.

“He’s been more consistent with the bat,” Sczublewski said. “We’ve worked on getting his fundamentals down a little better, and he’s become a more balanced player.

“He’s always been a fantastic outfielder. He’s got a lot of talent, a rocket arm and he covers a lot of ground.”

Lunning said he has grown as a player during his senior season with the help of Albert Lea’s coaching staff.

“I think I’ve improved the most with being a leader, a captain and being more consistent,” he said. “They told me to just trust my instincts, and the rest of it will just happen.”

This year was Lunning’s second year as a captain, and he shared the responsibility with fellow First-Team All-Area selection Dylan See-Rockers.

The Tigers started the season 6-2 and finished 9-12. Albert Lea was involved in 11 one-run games: The Tigers won four and lost seven of those games. Albert Lea ended the regular season on a high note by sweeping the season series against Austin with a 2-1 victory in the regular-season finale. The Tigers took that momentum into the Section 1AAA tournament, where they shut out Hastings 6-0 and lost their next two games (Faribault and Rochester John Marshall) by one run each.

“We were in just about every game we played,” Lunning said. “We came together as a team, but we just fell short. Everyone enjoyed the season, I know I did.

Lunning is planning on attending the University of St. Thomas in Minneapolis, where he will study business and finance and play football.

Baseball wasn’t in Lunning’s plans. However, after he was selected to the Minnesota All-Star Series, he said he is entertaining the thought of playing baseball at the college level as well.

Lunning’s mother, Jennifer Lunning, said one of the most memorable moment’s of Lunning’s career at Albert Lea was watching him hit those grand slams on consecutive at-bats.

Lunning made the varsity roster as a freshman, and he started as a sophomore in right field and transitioned to center field.