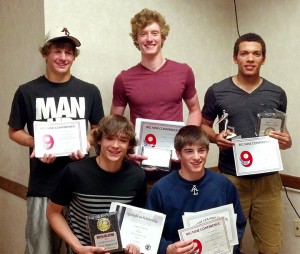 The Albert Lea baseball team had its annual baseball awards banquet Monday at the American Legion. Front row from the left are Wyatt Paulsen and Johnathan Fleek. Back row from the left are Zach Bordewick, Dylan See-Rockers and Makael Lunning. Paulsen won the Most Improved Player Award. Fleek and Bordewick earned honorable mention All-Conference. Dylan See-Rockers and Makael Lunning were captains. Both players were All-Conference selections and will play in the Minnesota All-Star Series. Lunning was also the team batting champion (.423), and he won the Three Sport Award. — Submitted 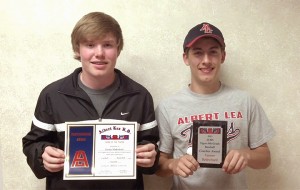