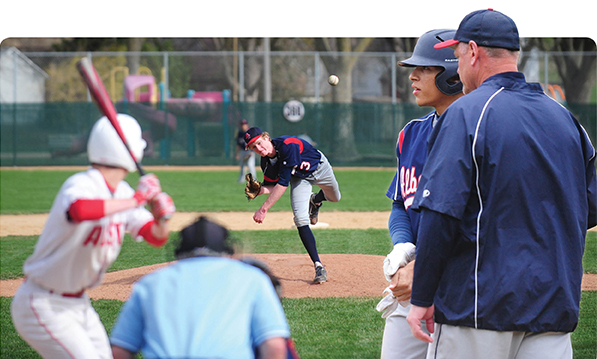 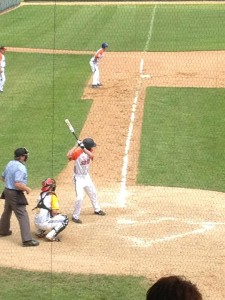 Dylan See-Rockers of Albert Lea stands at the plate during the Minnesota All-Star Series. — Submitted

“The neat part about coaching the All-Star game is watching the kids come together as a team,” Sczublewski said. “They’re the best players on their teams, and they have something to prove. Boy, did these kids do that.”

The event featured graduating seniors, and Albert Lea was the only school to have more than one player on the squad: Makael Lunning and Dylan See-Rockers.

“Both of our kids showed they really belonged in that caliber of play,” Sczulblewski said.

The South got off to a great start on Friday with a 4-3 win over the East All-Stars. See-Rockers scored the first run of the game after he hit a double down the left field line.

“It was cool getting to know my teammates — some of the people from the Big Nine and some of the smaller schools,” See-Rockers said.

Other players from the Big Nine Conference who were selected to the team were Alex Brady of Rochester John Marshall, Danny Pierce of Faribault, Bryan Rohde of Winona, Christian Rosenow of Rochester Mayo and Colton Schock of Owatonna.

The game has featured several players who have played for the Minnesota Twins since 2000. Catcher and first baseman Joe Mauer and pitcher Glen Perkins played in 2001, and Cole DeVries participated in 2003.

“It was a lot of fun and a good thrill,” Sczublewski said.